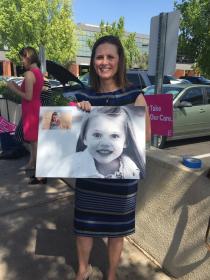 (Photo by Will Stone - KJZZ)
Stacey Lihn of Phoenix worries an ACA repeal would jeopardize care for her daughter who has a congenital heart defect.

As the U.S. Senate mulls its next step on health care, community groups and constituents are keeping the pressure on Arizona Sen. Jeff Flake. Some shared those concerns at Flake's office in Phoenix on Wednesday.

Flake never came out definitively in favor or against the Senate bill, but he has said he would support the backup option — repeal major portions of the Affordable Care Act (ACA) and then replace it later.

Despite opposition from several key Republicans, Senate leadership has indicated they would like to vote on the motion to proceed next week. That prospect has Stacey Lihn of north Phoenix concerned. Her daughter was born with a severe congenital heart defect, which left her with only half a heart.

MORE: Even Without Repeal, Arizona ACA Marketplace Could Be At Risk

“She could go into heart failure at any time, which would take me away from my job," said Lihn, who currently gets health care through her employer. "I would hate to choose between sitting bedside in the hospital with your child or going to work to save health care and have insurance.”

The Arizona Hospital and Health Care Association and others have come out against a straight up repeal without a replacement, in part because it would phase out Medicaid expansion and disrupt the ACA's individual marketplace.