Military Surplus Saves Taxpayers Money, But Who Is Getting Armed? 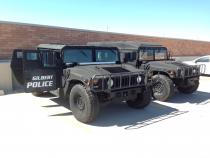 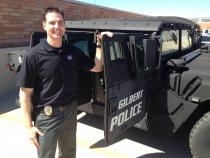 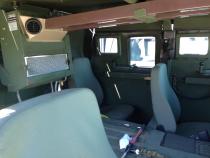 Photo by Nick Blumberg - KJZZ
The interior of one of the humvees, which is armored. 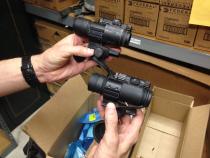 Photo by Nick Blumberg - KJZZ
Gilbert also acquired sights for the rifles its department issues to specially-trained officers, though they did not acquire any military surplus weapons.

Police clashing with demonstrators is nothing new, but in Ferguson, Mo. recently, there were scenes of military-style vehicles patrolling the streets during protests. That brought into the public eye a controversial federal program known as 1033. The program transfers surplus military equipment to local law enforcement around the United States.

Analysis of Pentagon data shows that in the last eight years, Arizona was among the top ten recipients of military surplus ranked by dollar value.

Two dark-colored Humvees sit in the bright sun outside the Gilbert Police Department's headquarters. Sgt. Jesse Sanger opens a heavy, bulletproof door to show off the vehicle's spartan interior. The Pentagon says these two vehicles are together valued at more than $100,000.

"We were literally using a 1990s bank armored car that we had that was on the verge of not even running anymore," Sanger said.

Not having to pay to replace that old armored car is exactly the kind the kind of cost savings the 1033 program was designed to make possible. Agencies around Arizona take advantage of it, to the tune of $56.6 million worth of equipment over the last eight years.

"They've really helped us through the lean times," said Bart Graves, a spokesman for the Arizona Department of Public Safety. "We have a place to go to for less-expensive critical needs for equipment, rather than try to convince the legislature to buy it for us."

DPS received the largest number of items of any agency in Arizona under 1033. It got rifles for its criminal investigations and for highway patrol officers, a tanker to refuel aircraft, a bomb disposal robot, and it got a Humvee, too. Graves said the equipment helps DPS meet its statewide responsibilities.

"In Southern Arizona, we assist the Border Patrol in some operations, or the sheriff's departments down there in the southern half of the state. We need a vehicle that can go off-road, that can go to a lot of those places that most vehicles cannot get to," Graves said.

But some of the agencies received equipment that raised eyebrows. For example, the state Department of Agriculture received M16s and 12-gauge riot-type shotguns. In a statement, the department said it has fewer than a dozen police officers, and only those who have been specially trained are issued M16s.

"We have a population of 82,000 students, not to mention staff and faculty and visitors that come here. It's its own city," said Sgt. Daniel Macias of the ASU Police in an interview two weeks ago. He said the department's rationale was that officers had to be prepared in case of an active shooter on campus.

To carry an M16, officers need to go through training. When asked whether a rifle is available to every ASU officer, Macias told KJZZ, "We have approximately 50 percent of our officers who are rifle-certified currently."

But in a statement to the Arizona Republic on Monday, ASU's interim police chief admitted only five of the agency's 80 officers have been trained.  After a public outcry over the heavy arming of campus police, ASU now says it will give the weapons back to the military and replace them with newer rifles.

To critics its not only who gets the weapons, but the 1033 program itself. The ACLU came out with a report earlier this year criticizing militarized cops.

"Neighborhoods are not war zones, and our police officers should not be treating us like wartime enemies," the report's authors wrote.

"People are like, 'Oh my god, it's a military coming in!' There are some agencies out there, sure, that have acquired — I know MCSO had a tank that they just had to give back. What you're going to do with a tank, I'm not sure, but I'm Sheriff Joe had a use for it!"

Whether Sheriff Joe Arpaio had a use or not is moot. The Maricopa County Sheriff's Office was terminated from the 1033 program in September for failing to properly track some of the weapons it received. It's the first agency in Arizona to be kicked out.

For his part, Sanger said the 1033 program has helped Gilbert make ends meet during the recession.

"Everything we've acquired is something we were looking at buying anyway, so it's saved the taxpayers literally hundreds of thousands of dollars," he said.

But public response the last few months months has made it clear that even if it doesn't cost them any extra money, there are plenty of taxpayers who are raising red flags about military surplus arming the neighborhood cop.

Agency: Arizona State University Police Department
Total acquisition value: $34,930
Weapons: This campus police department only received one type of item, M16 rifles (70). It has since pledged to return them.

The total acquisition value represents only items that are required to be inventoried under the 1033 program.