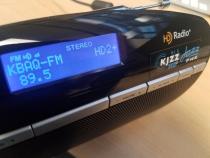 (Photo by Sky Schaudt - KJZZ)
KBAQ is 89.5 FM in the Phoenix area — and sometimes in Salina, Kansas, too.

Driving home for lunch late last month, Ken Baker of the Radio Kansas Network kept to his routine, checking the signal from his Salina station — 89.5 FM — when he received a surprise.

“I looked down at the radio and, about the time I looked, the HD radio display resolved to show a set of call letters I’d never seen before: KBAQ.”

Unlike AM signals, FM is confined to line-of-sight, so KBAQ doesn’t typically reach much beyond the Valley, let alone to a Volkswagen Beetle 875 miles away.

The feat is made more remarkable by the fact that electromagnetic energy, such as light and sound, decreases in intensity in proportion to the square of distance from a source: double the distance, and the power density falls off by a factor of four.

“What are we — 800, 1,000 miles? How many doublings of distance is that? And when you think of that HD signal that had to resolve just to give me those call letters on my display, that’s a pretty darn delicate signal. And the analog — the audio I was listening to — it sounded really solid, too,” said Baker.

“When conditions are right, that signal will refract off the E layer and be picked up in places like Kansas and Oklahoma and Texas.”

High in the air, at the edge of space, drifts the ionosphere, a soup of charged particles divided into D, E and F layers (the F layer sometimes splits into two sublayers). The E layer cannot normally reflect FM, but sometimes — mostly during summer, but sometimes in wionter, too — disturbances like thunderstorms create E-layer ripples that gather charged particles into denser, more reflective clouds that can.

“Some theorists say that it’s meteor smoke and meteor dust, way high up in the atmosphere, that gets ionized and is able to reflect radio signals a great distance — usually from Arizona to points east, on the order of 1,200-1,700 miles,” said Schecter.

In this case, that meant treating a few lunching Kansans to the digestive benefits of classical music.