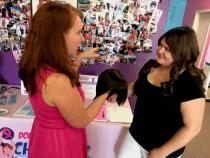 (Photo by Holliday Moore - KJZZ)
Holly Rose, founder of "Don’t Be A Chump, Check for A Lump," shows Anna Rusinowski one of her favorite wigs from when she went through chemotherapy treatment.

At the end of July, the Susan G. Komen Arizona chapter closes its doors, while its executive director promises to continue supporting cancer research in Arizona through the national cancer programs.

For more than a quarter century, Komen has fostered more than $25 million in grants for breast cancer programs statewide.

With Komen’s departure, others are hoping to meet the need at the grassroots level. For smaller nonprofits and businesses working on the front lines with women fighting breast cancer the fight for a cure gets personal.

Nikki Zuba is a consultant at Classy Sisters Wigs in north Phoenix — and on the receiving end where the breast cancer journey often begins.

Her clients are mostly women who last month, had a full head of hair and next month watch it slip through their hands.

“We see quite a few [clients] armed with their pathology report and the book that Holly puts out,” said Zuba.

She means Holly Rose, the founder of “Don’t Be A Chump, Check For A Lump,” helping women get the facts.

“Less than 10 percent is hereditary. Ninety percent of all women who get breast cancer, have no family history," said Rose. "You can tell this to the CEO, the attorney, the teacher, the home mom, and they are all shocked.  The majority of women have no idea!”

The mother of two young girls had advocated for the Pink Ribbon campaign.

“I had purchased all the pink merchandise; high-fiving survivors; but, I didn’t do a self-exam,” said Rose. “I had just turned 39 years old. A friend posted on Facebook a ‘feel your boobies’ post, encouraging women, ‘Do your self exams, do your mammograms.’ This time the message stuck. I did a self-exam, discovered a lump that turned out to be cancer.”

She braced herself for what was next.

Until that day in the shower.

“And handful after handful starts coming out, and I got out of the shower, tried to brush it and comb it, more handfuls kept coming out,” said Rose.

She shaved off the remaining hair.

“And, I went into my closet and cried for a really long time,” she said.

Before her children came home, Rose pulled on her wig realizing it was not out of vanity, but preservation. Her young daughter was too frightened to hug her mother without her hair.

“It’s not that she stopped loving me. I didn’t look like mommy anymore," said Rose. "I looked like the face of cancer to her."

At $250 the wig was a small, but necessary investment.

The emotional and financial toll, was adding up.

“When I walked into my first surgery, I had two days notice to come up with $5,000 for my deductible!” she said.

It became clear to her many women on the same path don’t have insurance for surgery or even the $250 for simply a wig.

“Women going without a wig simply due to lack of funds? That’s when we started our Wig Out program,” said Rose.

Including Anna Rusinowski, who at 33 just lost her hair and looked to the "Don’t Be A Chump, Check For A Lump" program for help.

Rusinowski, who just finished eight weeks of treatment, picked out a long chestnut brown wig and stopped by the "Don’t Be A Chump, Check For A Lump" headquarters to personally thank Rose.

Rusinowski, too, learned about her breast cancer by chance.

“I really didn’t ever give myself self-examinations, nor did I look in the mirror enough to notice signs of breast cancer,” she said.

Rose has discovered that lack of self-exams is a problem.

“Once I went through treatment, I realized no one else is doing self–exams either — and they don’t even know what to look for! There’s a big message missing from the whole Pink Ribbon campaign,” Rose said.

Instead of worrying about Komen leaving, Rose said it’s a chance to rally grassroots efforts statewide.

“Let’s raise that pink ribbon, not just put on our pink tutus and tiaras and take selfies, let’s empower women!” she said.

There are dozens of local businesses and organizations dedicated to women’s breast health. Including 10 medical centers and a mobile unit offering mammography.