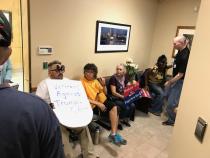 (Photo courtesy of Shannon Bryan)
Advocates wait in the lobby of Sen. Flake's office to express concerns about the healthcare bill.

Several Arizona disability groups want Sen. Jeff Flake to oppose the Better Care Reconciliation Act, the Senate health care bill. It was a tight fit in Flake’s waiting room as members of the community visited the senator’s office to share their fears and concerns about the bill.

The ACA replacement has proposed scaling back Medicaid expansion and restructuring the program so the federal government’s contributions are capped. The state estimates it would cost Arizona more than $7 billion by 2026.

Leonard Smith, who lives in Phoenix, is on Medicaid and said that pays for a caregiver to come and help him every day.

“I probably won’t even be able to work,” Smith said, explaining that the caregiver helps get him up in the mornings. “They’d probably end up putting me back in a nursing home.”

Nearly one in five Arizonans has a disability, according to Larry Wanger, the chair of the Arizona Disability Coalition, one of several organizations that want Flake to oppose the bill. Wanger said Arizona’s disability community is afraid that if the bill passes in its current form, and Medicaid funding is cut, states will have to choose which services to keep and which to get rid of.

“What it will do is actually bring us back to a point in time where more folks with disabilities end up going to nursing homes or institutions or group homes because the supports they need to live in the community will no longer be available,” Wanger said.

Wanger, who was also at the senator’s office, said several people were chanting "save our Medicaid." A handful of advocates were able to talk to a member of Sen. Flake’s staff. The senate is currently on recess and will be back on July 10.

Sen. Flake’s office says he has not seen the revised version of the bill yet, but that he wants to ensure those who currently have coverage don’t have the rug pulled out from under them, and that the bill is “fiscally sustainable.”