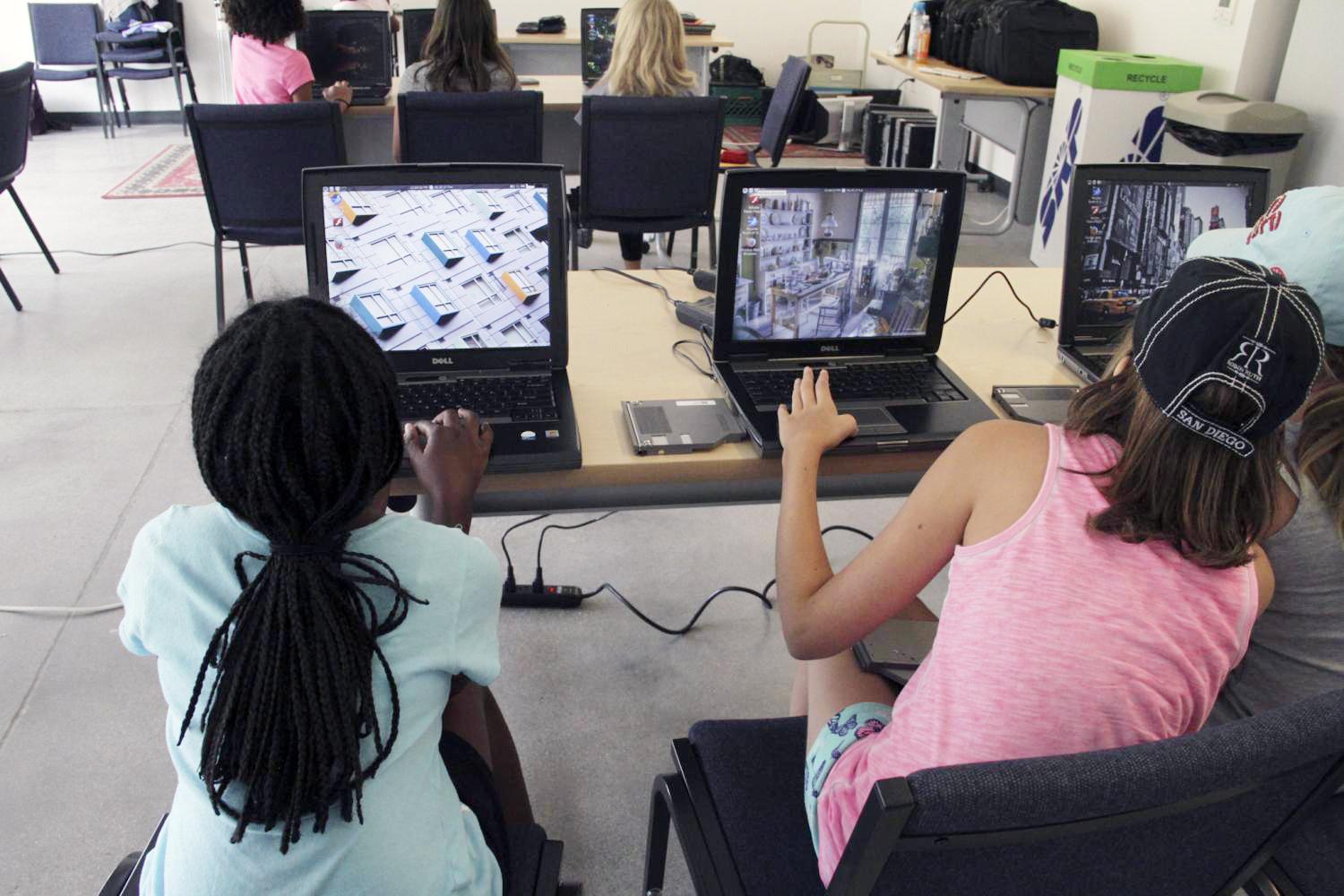 (Photo by Mariana Dale - KJZZ)
Each girl in the bootcamp got to take home their own refurbished laptop.

Three pairs of small hands reached inside the metal casing of a desktop computer in search of the hard drive.

“Try and pull it like this way," one girl said.

There's a clatter as the girls pull a rectangular silver box free of the motherboard.

This is Computer Techie Bootcamp. A new offering from the Arizona Cactus-Pine Council of the Girl Scouts at its recently rennovated Parsons Leadership Center.

For many of the girls, who are between fourth and seventh grade, it’s the first time they’ve ever seen the inside of a computer.

There will be almost half a million new jobs in computer science by 2024.  Like other STEM fields, there is a dearth of women in the field. But the Girl Scouts, best known for cookies and camping,  believes they can open the door to computer science.

'As A Female You Have To Really Be Strong'

One wall of the classroom is completely glass and you can see Phoenix's mountains shimmering in the heat. It’s way too hot for traditional camp activities like hiking, but the advantage at Parsons Leadership Center is the Wi-Fi access.

On this day of camp, former Intel tech worker Thalya Nero was the teacher. 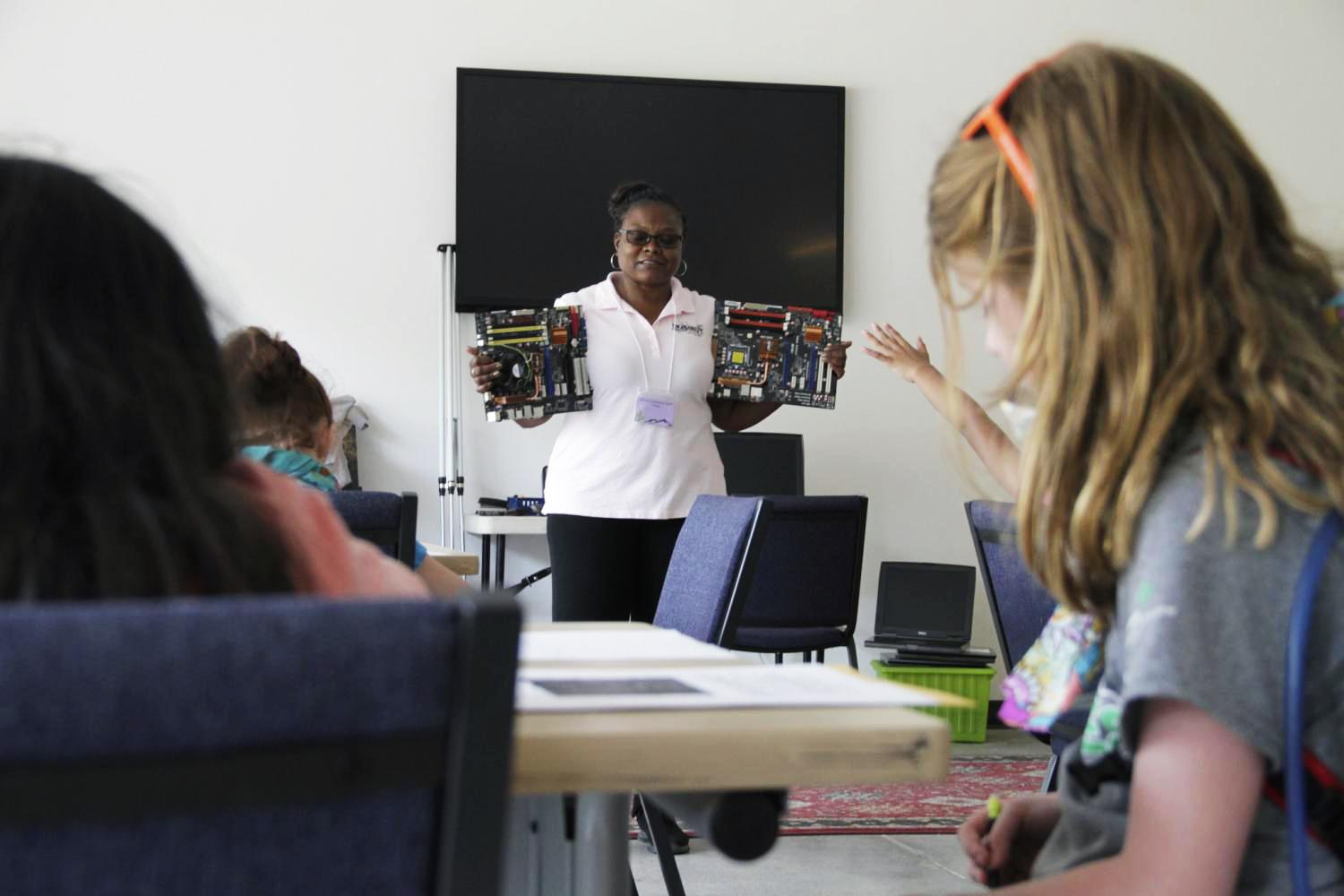 (Photo by Mariana Dale - KJZZ)
Thalya Nero holds up two motherboards for the girls to inspect.

She was a Girl Scout once too. Were there opportunities like this for her as a child?

Nero studied supply chain management before ending up as a contractor with company that worked with computers. She went back to school and went on to have a more than two-decade career at Intel.

“As a female you have to really be strong,” Nero said. She paused and tried to find the right word. “I don’t necessarily want to use the word strong. You have to be able to get in there and make your point and make sure that you know what you know.”

The ratio of women in the computer science field has gone down since it peaked in the 1980s. The National Center for Education Statistics estimates women earn 18 percent of computer science undergrad degrees.

“From a societal standpoint you don’t want anyone to be left out of high growth job paths,” said Charles Eaton, executive vice president of social innovation  at the Computing Technology Industry Association.

The group’s research shows even though today’s girls are digital natives, they’re less likely than boys to consider a career in tech.

“They need to see it everywhere," Eaton said. "It can’t just be an isolated event in their lives. When they go back to school they need to be supported in their studies.”

Studies from Google and Gallup point out just one in 10 female students say they often see people like them in the media.

Teachers and parents are more likely to have told male students they would be good at computer science compared to female students.

The report’s findings were based on phone interviews with students, parents and teachers and web surveys by principals and superintendents.

This year Arizona Girl Scouts had the opportunity to participate in 10 computer-science-related programs of more than 75 related to science, technology, engineering and mathematics.

Crystal Dingott organizes the Cactus-Pine council’s STEM programming. In the summer, she’s the director at Parsons Leadership Center and the girls know her by her camp name, Kitty.

“There are some underlying biases in our culture that work against women and girls in the sciences,” Dingott said.  “Girl Scouts has been fighting that battle for the last 105 years and this is no different.”

Parsons was formerly known as Camp Sombrero. With $18 million in renovations came a new focus on STEM. This is the first year for Computer Techie Bootcamps, one of 41 different programs offered. There is also a camp geared toward coding.

The national Girl Scouts organization announced in June it would offer more than a dozen new cybersecurity badges next year.

“Future generations must possess the skills to navigate the complexities and inherent challenges of the cyber realm,” Acevedo said press release.

Acevedo worked as an engineer for NASA and later for IBM and Dell.

Even if girls push past the stereotypes about who should be in computer science, they are likely to be in the minority in classes and at work.

Nadya Bliss is the director of ASU’s Global Security Initiative and a computer scientist by trade. At Cornell University she remembered computer science classes where she was one of few women.

“You have that moment when you walk in and you think, ‘Should I be here? Should I not be here? This is a little strange,'” she said.

Now, she works to foster an environment of inclusivity at ASU by sending women to conferences and making time to mentor students.

“It’s creating those relationships that when something’s going on, you have a group of people to reach out to,” she said.

Dingott said that’s why all-female environment of Girl Scout camp is so important.

The girls at this camp are still very much in the process of figuring out what they want to be.

Ella Hoffman looked forward to learning how to build robots later in the week.

“It’s really fun to do it and you could get a career out of it,” she said.

Chloe Flood thought the computer boot camp could set her on a path toward engineering or something like it.

“It’s going to completely change by the time we can get a job, like flying cars everywhere!” she said.

That’s one reason advocates say the sciences, no matter what discipline have another benefit.

“It’s about thinking in certain ways and breaking down problems into smaller chunks and that’s applicable particularly when the world is changing,” Bliss said.