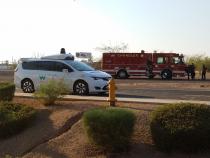 There’s a lot self-driving cars can already do. They can navigate around traffic cones, stop at railroad tracks, give bikers plenty of space - all things you’d definitely want a car to do if it was driving you around town.

But there’s more work to be done before the cars can truly drive themselves. For now, the driver still has to take over when, say, an ambulance comes up behind them with flashing lights and sirens.

“Right so the car can do just what you or I can do; it can hear the sirens and it can see the lights. And so what we’re testing today is about how far away can we see it? How far away can we hear it from different angles, different lighting conditions?” said Lead Systems Engineer Jaime Waydo — not to be confused with Waymo.

The white minivans with 360-degree cameras on the roofs drove up and down a closed road, getting intercepted by emergency vehicles with all sorts of siren options.

“And so it’s learning how do they use sirens and how can we take that and respond appropriately,” Waydo said.

But they’re not inputting every possible emergency scenario into the cars’ computers. Waydo said they’re building up enough examples to help the computers infer what they should do in a given situation, even if it’s something new, just like a human would. And ideally doing it better than some humans.

“There have been many instances where we are responding down a road, and vehicles will not pull to the right,” Chandler Fire Chief Tom Dwiggins said.

Sometimes people don’t notice the fire truck immediately or they’re choosing not to pull over. Still, he and other emergency responders were skeptical at first of adding self-driving cars to the mix. He said it reminds him of when airbags were first introduced.

“And that was new technology. And there was a lot of concerns. And they actually had some that they let us cut to see what would happen,” he said.

In the same vein, local officers and firefighters have driven in Waymo vehicles, to get a better sense of what it would be like to work with them on the road regularly, a future that the engineers are certain will come in just a few years’ time.