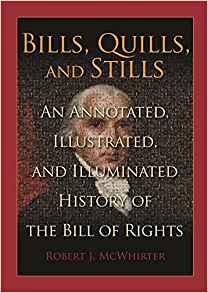 (Photo via amazon.com)
"Bills, Quills and Stills: An Annotated, Illustrated, and Illuminated History of the Bill of Rights" by Robert McWhirter

Since he took office last year, President Donald Trump has been bumping up against a document that’s hard to get around in this country — the Constitution.

From his attempts to institute a travel ban for people from certain, Muslim-majority countries to new challenges over his business interests, the questions of constitutionality keep coming.

And, tonight, a constitutional scholar will be digging into what this means for our democracy.

Robert McWhirter is a Constitutional scholar and historian and the author of "Bills, Quills and Stills: An Annotated, Illustrated, and Illuminated History of the Bill of Rights." Tonight at Changing Hands bookstore in Tempe, he’ll be giving a talk titled “The Constitution v. Donald J. Trump.”

I spoke with him recently about this presentation, and he thinks these kinds of constitutional challenges keep coming up when it comes to Trump because Trump doesn’t understand the Constitution to begin with.