A Ride With The Copper Cruisers Motorcycle Club 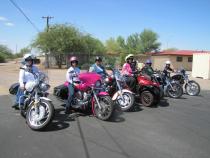 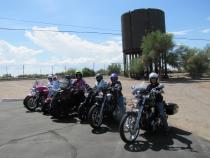 In this week's We Are The Valley segment, KJZZ’s Sarah Ventre took a ride with the Copper Cruisers, a local women’s motorcycle club. Most of the women are veteran bikers, but it was Sarah’s first time.

As everyone saddled up, Pat Glover, my motorcycle taxi driver for the day, opened my eyes with a warning.

"Your life is in your own hands," Glover said. "I ride my own ride. You’re riding with me voluntarily. If anything should happen, I’m not taking any responsibility for you whatsoever."

I’m not gonna lie, I was scared. But I wasn’t alone. The great thing about motorcycle clubs like the Copper Cruisers is that everyone rides together. That day, the group of seven (plus their one passenger) went from central Phoenix to the famous Space Age Lodge in Gila Bend.

But before we even left, group leader Helen Skibitzki assured everyone that we’d have each others’ backs.

"We will not leave anyone behind," Skibitzki said.

Before we got on the road, we agreed on positions for our pack. It was amazing. Everyone seamlessly formed into two staggered, parallel lines in one lane, with nothing more than a few subtle nods to one another and maybe a hand signal or two.

The ride was incredible. Feeling the wind, smelling the creosote and noticing how close the mountains looked. But it also became clear that riding is a very communal activity.

At one point, a car tried to pass our pack, but only made it in front of a few of us. Pat and another rider, Jolie Donahue, coordinated the group’s moves as we got in front of it, sending a very strong message. We were not to be messed with.

"It’s a wonderful joy to share the ride with other people," Jolie said. "It’s also a lot safer to ride in a group than by yourself."

Everyone echoed that sentiment over burgers and breakfast plates, especially group leader Helen Skibitzki. She was badly injured just outside of Chattanooga on a cross-country trip.

When she found herself in the hospital thousands of miles away from home, she found support from other bikers.

"And within a matter of 24 hours I had eight people standing in my room, that I’ve never met," Skibitzki said. "Because they cut everything off, there were things you could not use anymore, like certain undergarments. And they actually went to the Walmart and bought me a bra and underwear because that is – you don’t think about that – that is one of the things that you need when something like that happens. But they were right there."

Skibitzki tears up as she tells this story. But throughout the meal, I could see connections forming between different women. More seasoned riders checking to see how some of the rookies were doing. Swapping stories about riding to the legendary Sturgis Motorcycle Rally in the rain and accidentally passing a pack of Hell’s Angels on the road — a big no-no.

"It doesn’t matter if we’ve known each other a day or 20 years," Jolie said. "We’re here to support each other."

Jolie said there’s something about riding that links you together. And after spending nearly four hours in the saddle, I understand.