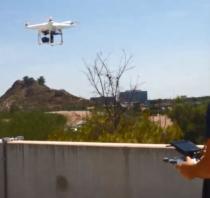 Cameo Hill/KJZZ
An operator flies a drone in Tempe.

There are already federal and state laws regulating the use of unmanned aerial vehicles; however, there was still some concern in Tempe regarding its proximity to Sky Harbor International Airport, said Councilman Joel Navarro.

He started the discussion about drones within the city about two years ago.

“Does the state law and the FAA guidelines really work or do we need another layer of protection? So that’s kind of where we’re at now,” Navarro said.

He said the goal is to ensure the parks are enjoyable and safe for all.

Source: Know Before You Fly