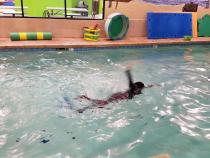 (Photo by Annika Cline - KJZZ)
At SWIMKids USA, the owner set aside a day and time for Muslim women to swim here privately. 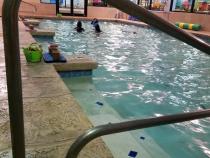 (Photo by Annika Cline - KJZZ)
Some women were telling Lana Whitehead, owner of SWIMKids USA, that they simply don’t swim at all in public pools because they don’t feel comfortable doing so in their full-body suits.

The month of Ramadan began in late May, Muslims around the world observe this time by fasting during the day and taking more time for reflection and prayer. In the U.S., many Muslim communities will come together in neighborhood mosques to listen to recitations of the Quran, the sacred text of Islam.

All those terms — Ramadan, Quran, Islam — they may be unfamiliar to some Americans. Mosques hold open houses or panel discussions just for outsiders to the faith to teach them what it’s all about. Everything from why some Muslim women cover their hair to what jihad really means.

In spite of the outreach, some Muslims in America are feeling unwelcome and afraid after the election.  In a little bit we’ll hear more about the strain on American Muslims, but first, a trip to a local business that tries to make Muslim women feel more comfortable. The Show’s Annika Cline takes us there.

Yeah that “eyes down” thing can be tricky, but it’s important if you want to get anywhere fast. That’s what four students are learning at SWIMkids USA, a swim school in Mesa.

"And this is their first opportunity to have formal swim lessons,"  said Lana Whitehead, SWIMkids owner. The four students are sisters from a Muslim family. And they’re wading, splashing and paddling in full-body swimsuits. You might’ve heard the term “burkinis” used for these suits that provide coverage from ankle to hair.

"And a lot of time there’s a lot of embarrassment. People don’t understand. People are rude. So they don’t feel welcome," Whitehead said.

Some women were telling Whitehead they simply don’t swim at all in public pools because they don’t feel comfortable doing so in their full-body suits. So Whitehead set aside a day and time for Muslim women to swim here privately. Women like this mom, who met Whitehead after bringing her 1-year-old daughter to SWIMkids.

"I was swimming since I was a kid back in my country," the woman said.

She doesn’t want us to use her name because she’s worried about the increased anti-Muslim hate crimes in the U.S. She had her own jarring experience firsthand at a Valley pool when she moved here years ago.

"And I went there to swim, and I had my full-body cover swimsuit," she said.  She says in the middle of her laps, another swimmer stopped her to ask her what she was doing.

"And then she asked question after question and all the questions was just making me very very unhappy and sad," she said.  She says the other swimmer suggested she wasn’t clean enough to swim in the pool. "And then she said what are you doing in the United States? And then I said I have a high level of education and then I’m working here. And she said ‘you are spending our tax money.’  And after like swimming three days a week, I didn’t swim for 9 years."

She says maybe this level of harassment would have been rare. But she was also sick of being stared at wearing her fully-body suit. To stop swimming was a major decision, though, because it isn’t just a hobby for her. She was a champion swimmer in Iran.

Now she has the option to swim at SWIMkids, where she feels respected by the staff.

"Who cares if we’re in different religions and wear different clothing. Aren’t they sweet, aren’t they beautiful? They’re women! And I want to stand up for the rights of other women," Whitehead said.

It’s no championship pool. It doesn’t go more than four and a half feet deep, the walls are lined with colorful pool noodles, waiting for eager kids to drag them into the water.

And now, to get a deeper look into the Muslim community, I’m joined by Meira Neggaz, executive director of the Institute for Social Policy and Understanding. The group earlier this year released its second American Muslim Poll. We ask Neggaz what are some of the key takeaways for her.