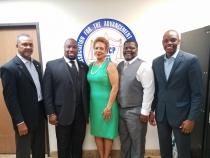 “Taxpayers are paying for the wellness and maintenance of these monuments highways and statues,” said Rep. Reginald Bolding Jr. “I don’t have a choice whether or not my tax dollars go to promoting symbols of hatred.”

The Monday press conference was organized by the East Valley NAACP and held at the offices of The Arizona Informant, a historically black publication.

“If we continue to look at monuments and what they stand for, why are we memorializing something that’s wrong,” publisher Cloves Campbell Jr. said.

The NAACP points to six public monuments in the state:

The group hopes Arizona will follow in the footsteps of cities such as Louisiana that recently removed four public monuments to the Confederacy.

Supporters said the monuments, while markers of historical events, symbolize hatred and racism.

“Our investment probably should be in the education of the civil war and probably civil rights,” said East Valley NAACP President Roy Tatem Jr.

Two years ago, Bolding was part of a movement calling for the removal of Arizona’s memorial to Jefferson Davis.

“We’ve called on the governor,” Bolding said. “What he gave us was lip service at the time, and we hope that we can get action today.”

An inquiry to Ducey’s office has not been answered as of Monday afternoon.