Inside Arizona Classrooms: How A First-Year Teacher Survived And Learned With Her Students 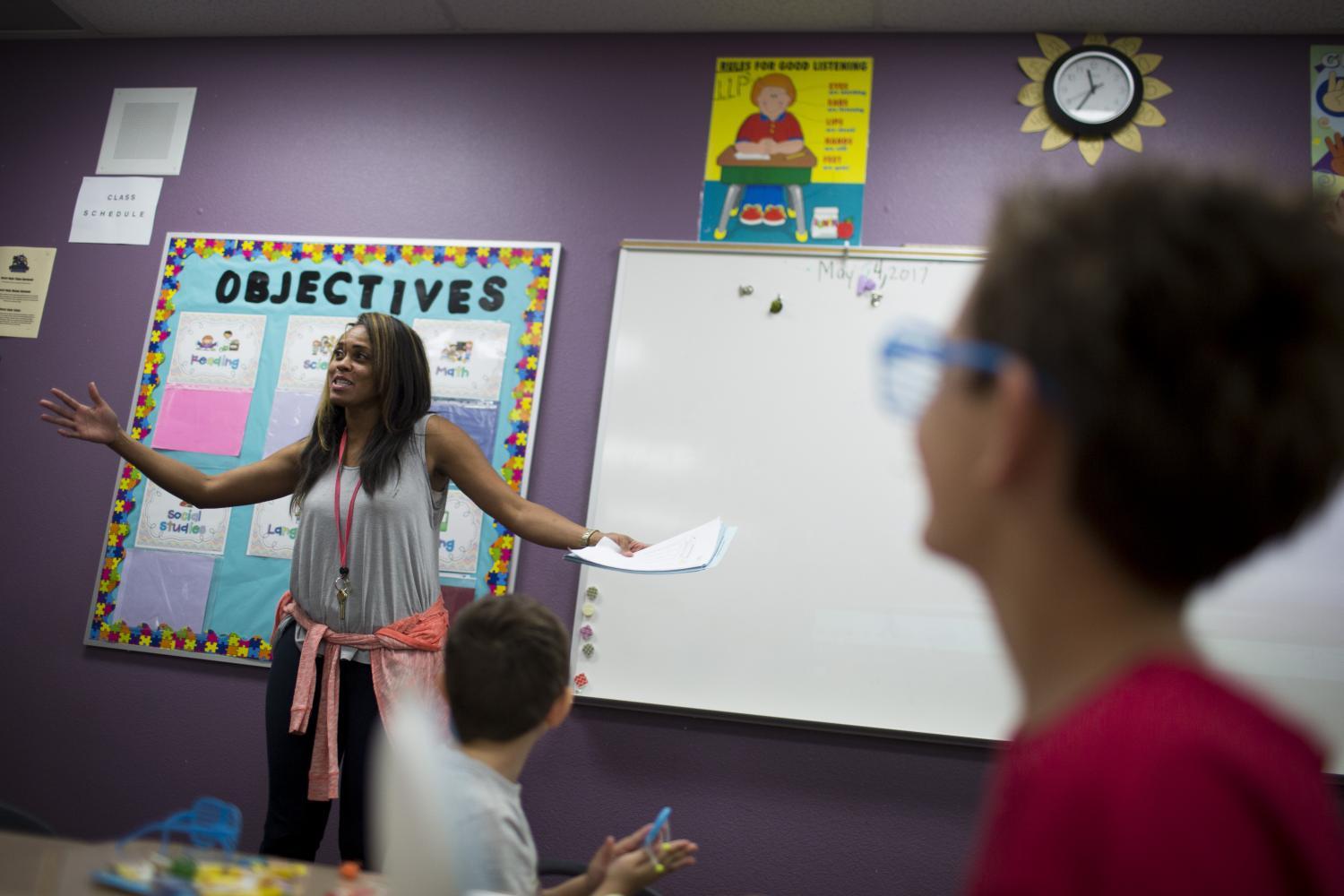 (Photo by Caitlin O'Hara)
Tracie Ervin awards her second grade students certificates.
It's the end of the school year and one first-year teacher has managed school, work and family life full time — and learned what it takes to manage a classroom along the way. In our latest installment of the series Inside Arizona Classrooms, we follow her growth and show how the education workforce is changing to accommodate more teachers like her.

Second-graders, soon to be third-graders, work quietly at their desks in Tracie Ervin’s classroom at Desert Oasis Elementary School.

“Alright, guys, so, tomorrow is our field trip,” she said as she read off a list to an attentive group of students.

It’s a stark contrast to the first time I visited Ervin’s classroom, as she began her first year as a full-time teacher at the district. Students had trouble sitting still during a group reading.

“OK, who can give me an example of Colonial dress?” she said, and students shouted out answers over one another. When it got too loud, Ervin said, “So, boys and girls, it’s my turn to speak, because we need to raise our hands to speak.”

And now, at the end of the year, even the physical room feels more welcoming. There are more student-drawn posters on the walls, music comes down from the overhead speakers and the desks are rearranged into bunches rather than separate rows.

“When I first started, I had no idea, no idea what I was doing,” she said. “I didn’t know how this was going to look, how the kids were going to respond, how my technique was going to engage the learners.” 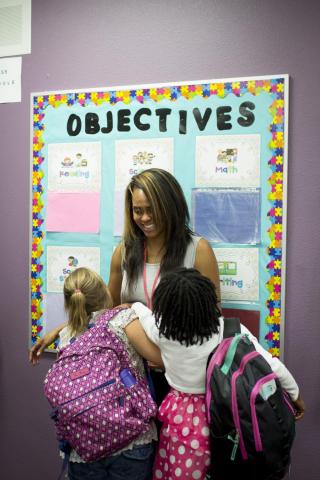 (Photo by Caitlin O'Hara)
Tracie Ervin says goodbye to her second graders on the last day of school.

And now she’s got the students under control using techniques like singing “Yankee Doodle Dandy” at the end of the day.

She expected a more traditional setup, like instructing a group of students sitting quietly and adjusting to the teacher. Now, Ervin said, she adjusts to the kids.

“What I’ve learned this year is differentiating,” she said. “Learning that everyone has a different learning style. There’s no more the traditional way."

But getting to that point was no easy task.

“There were times this year I said, ‘I don’t know if I’m coming back,’ because it was very difficult,” she said. “It was very stressful at times, trying to figure out how can I get to this learner, how can I really get this child to produce.”

Ervin’s first year was stressful because she’s also going to school full time to get her teaching certificate.

Ervin’s district was able to hire her because of new legislation that allows districts to hire teachers who have certain expertise but lack standard teaching certificates. It’s one way a lot of schools are getting around what some school administrators are calling a teacher shortage.

“When we get an application, we’re calling that individual within minutes. That’s not happening every day, though,” said Justin Wing, head of human resources at Washington Elementary School District in Glendale.

Washington is the largest elementary school district in Arizona, with 23,000 students. Wing said it used to be they would recruit teachers around college graduation time, but the teacher shortage changed that.

“Every day is a recruiting day,” he said. “We still have about 51 teacher vacancies, with little to no applicant pool to speak of.”

In an attempt to address those empty positions, Gov. Doug Ducey recently signed the bill to let schools hire someone without formal training for teacher positions.

Since the legislation passed, Wing said the district has had one or two applicants with those reduced qualifications.

The bill has been met with mixed reactions, said Mark Joraanstad, director of the Arizona School Administrators Association.

“A lot of people feel the new law harms the professionalism of teaching as a whole in making the standards lower,” Joraanstad said.

He said the rigors of teaching require more than just expertise in a field.

“Getting along with students well, at the same time keeping the classroom under positive control, is really a challenging skill,” he said.

Joraanstad sees the new law as a short-term solution. 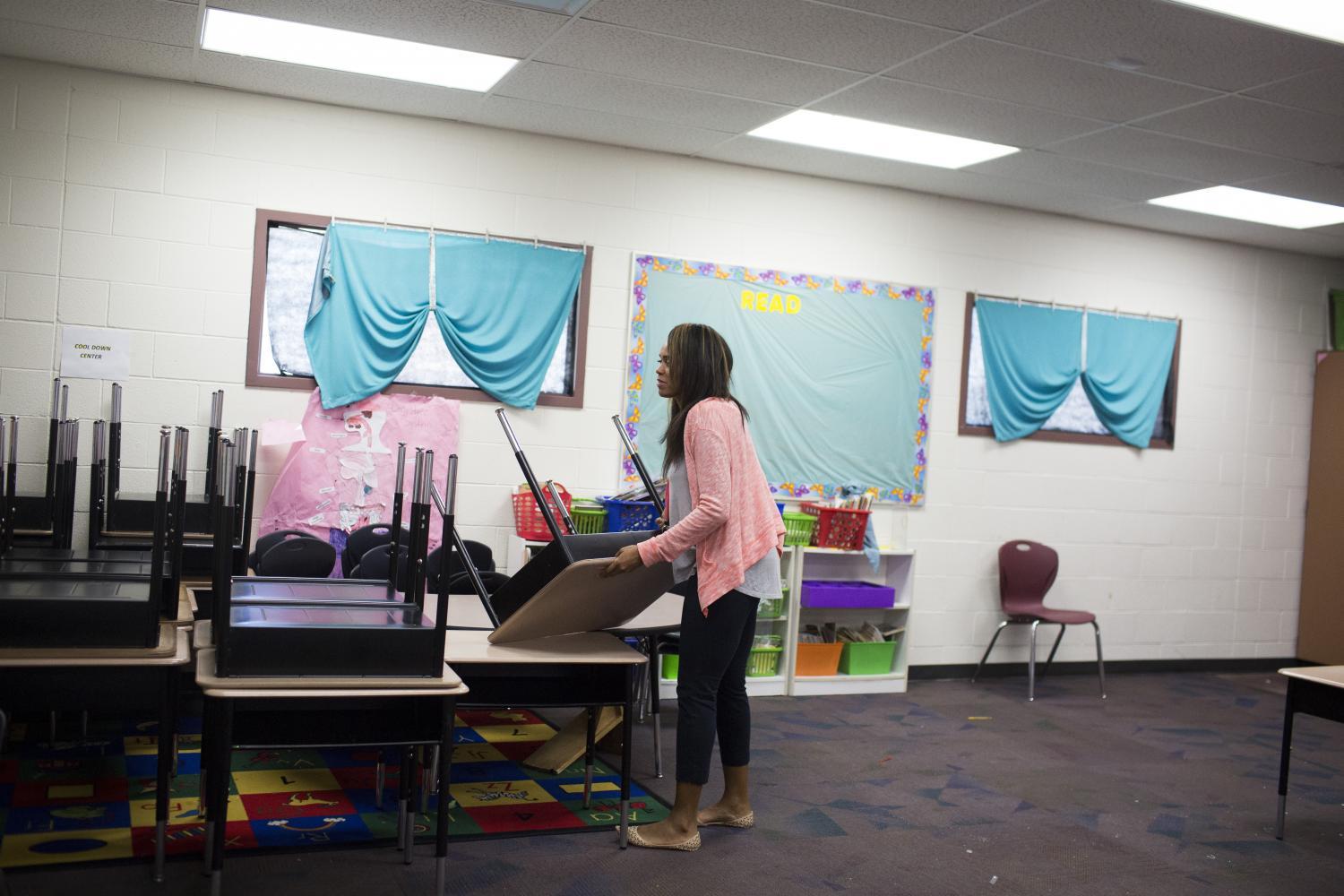 (Photo by Caitlin O'Hara)
Tracie Ervin cleans up her classroom after a party on the last day of school.

Carole Basile, dean of Arizona State University’s Mary Lou Fulton Teachers College, said there may not be a solution to the teacher shortage. Rather, the workforce itself is evolving.

“It does go in cycles,” she said. “But I’m not sure that this workforce is going to come back in the same way it always has. I’m not convinced of that.”

Basile said the field used to be predominantly women, but now women are finding other, higher-paying jobs.

She said changing the teaching field will take a change of mindset, and that administrators need to think of something other than "You’re a teacher, teach everything from math to art to a class of random children."

“We’ve got to start to think about this differently,” Basile said. “ It’s not a workforce shortage issue, it’s a workforce issue.”

Back at Desert Oasis, teacher Tracie Ervin still has another year of school to go before she has her teaching certificate.

And she said she’s thought about throwing in the towel, but she feels something tethering her to the classroom.

That passion for teaching is what many schools are still hoping to find in bringing more teachers into the classroom.