Arizona Nonprofit Teaches People How To Live Without Their Sight 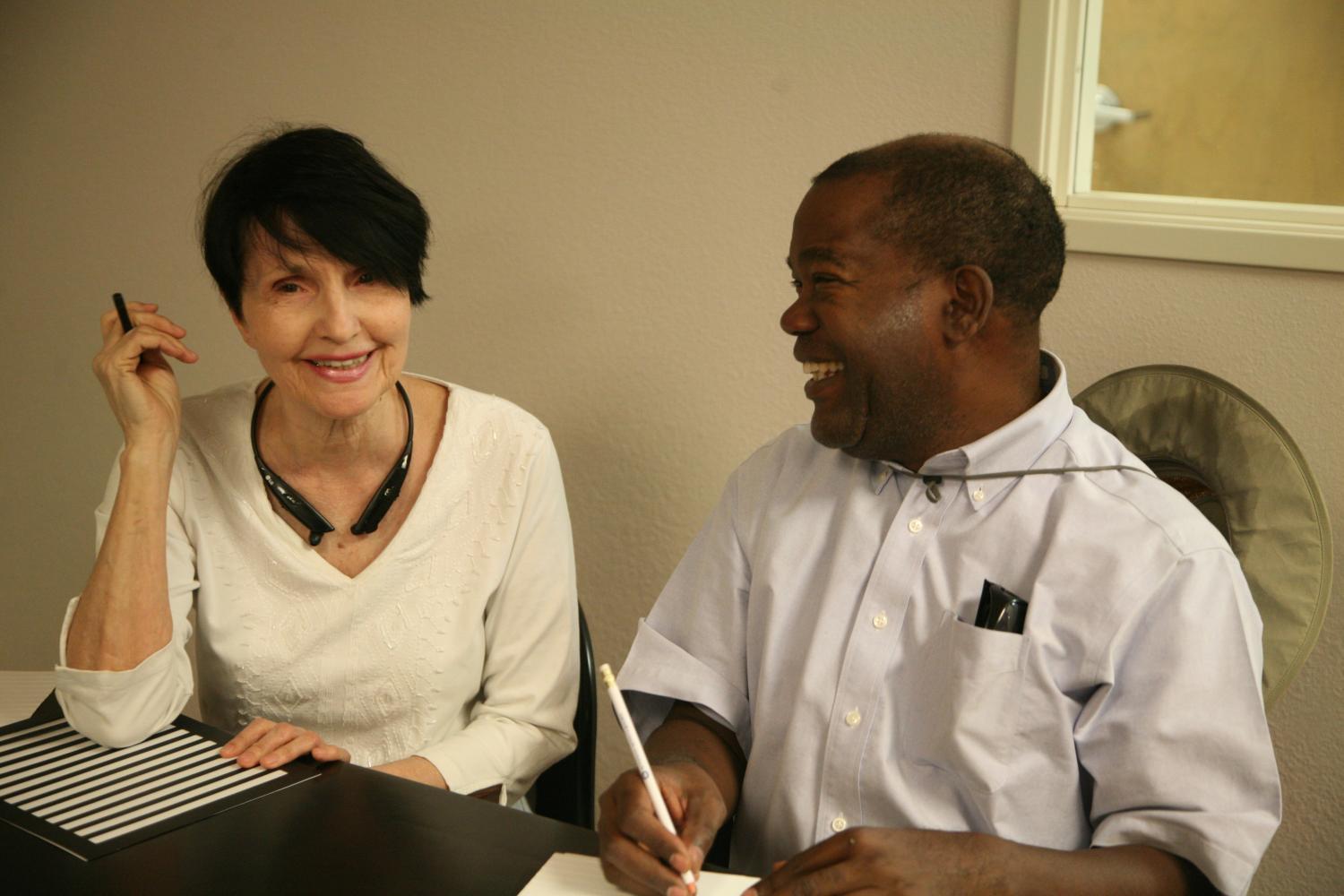 (Photo by Stina Sieg - KJZZ)
The Arizona Center for the Blind and Visually Impaired teaches people how to navigate the world, even as their view of it slips away.

No two answers to that question are alike here at the Arizona Center for the Blind and Visually Impaired (ACBVI).

It was just something she “had to get used to,” said one woman. One of the hardest things was “worrying about what other people thought,” replied a man. Another woman described lying around on the couch and having “pity parties.”

You’ve probably have never have heard of this place, located in an unassuming brown building on a residential Phoenix street. But ACBVI, a nonprofit, has been around 70 years, helping the visually impaired adjust to a society that was built for the sighted. On a recent morning, that meant showing a support group the wide array of white canes available.

Lily Vu, 36, smiled and winced as she held onto one all folded up.

“Now, hold the handle and let it go,” coaxed the female instructor. 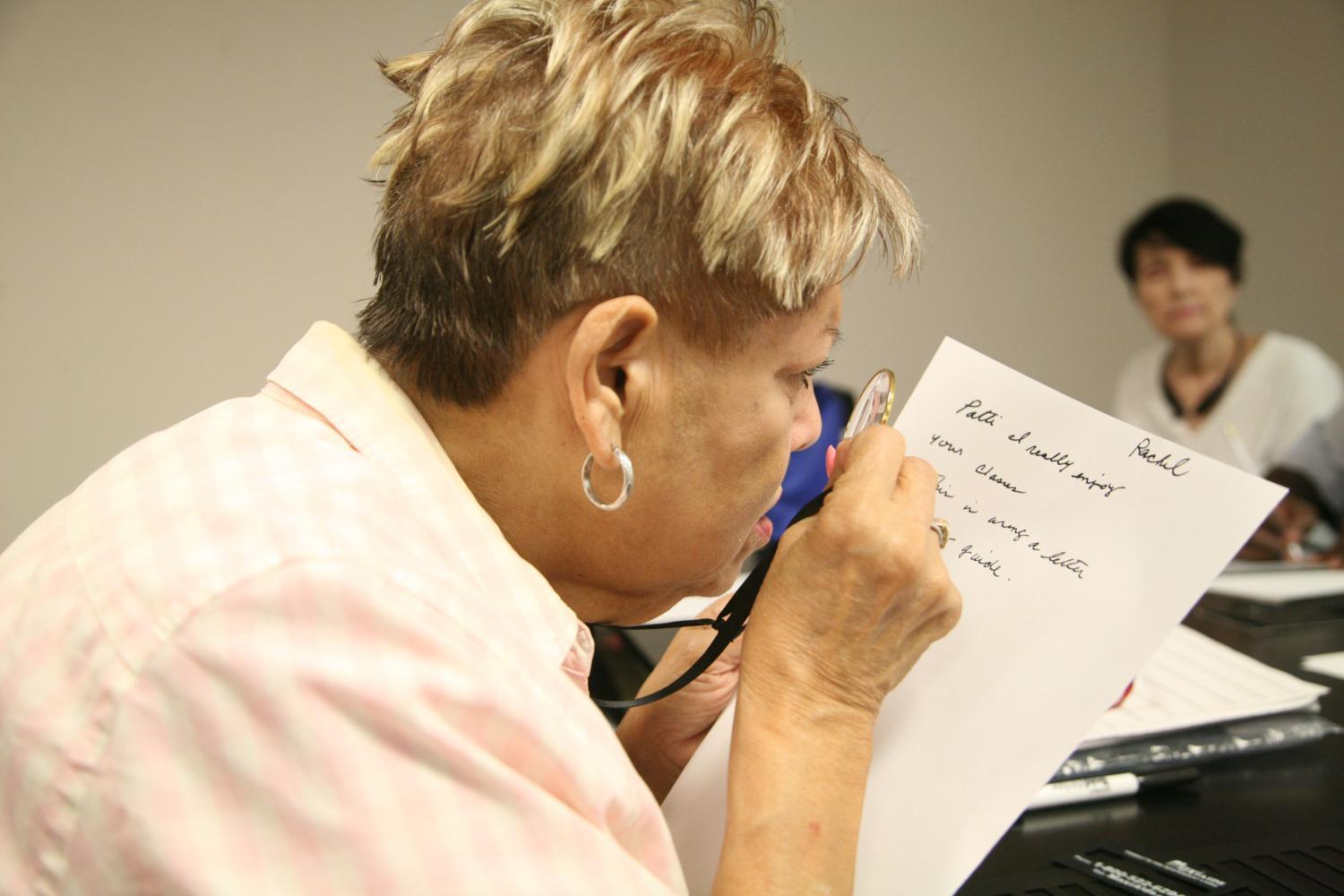 (Photo by Stina Sieg - KJZZ)
Like most people with visual impairment, Rachel Moran is not totally blind. At the center, she learns how to harness the sight she has left - and how to plan for losing more of it in the future.

“Oh, I’m scared!” Vu said, before guiding the cane to unfurl and snap into place like a tent pole.

Vu’s vision has been getting worse for the last eight years, but she’s pretty new here.

“This is my third week,” she said.

And so she’s just now starting on this journey toward more independence. Gradually, this former pharmacist will learn how to use one of those white canes, how to read braille, how to make dinner for herself. She’s already learned how to navigate features on her phone she never know existed — with the help of a familiar, automated voice.

“Siri does a lot for me,” she said as she smiled.

On one level, this is about helping Vu get back into the workforce. But, really, it’s more about helping her regain control of her life. It seems to be working. Vu said she’s often happier now than she was before she starting losing her sight. She remembers getting depressed back in her late 20s, for reasons that just don’t seem important anymore.

“With my vision loss, I think I’ve realized how good I had it back then,” she said. “I mean, I was fairly healthy. I was young. I had my vision, I was in a really good place, and I didn’t appreciate that, and now it’s made me learn to appreciate what I do have.” 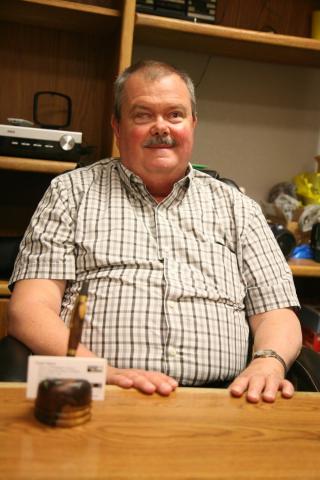 (Photo by Stina Sieg - KJZZ)
Frank Vance, who runs rehabilitation services at the center, as been blind since he was 15. Above, he sits at his desk - with a carved wooden piece he made to his right. The center sells those, as well as other crafts, made by its clients.

At ACBVI, it’s easy to find people who are philosophical or downright lighthearted about their condition. Here’s how Rachel Moran described the constant problems she has with voice-to-text technology, from wrong numbers to some pretty serious typos.

“Even to strangers — I’ve sent messages to people I don’t know. And they’re inappropriate, and I’m like, 'I'm so sorry, I didn’t mean to say that, no to you — or to anybody,'” she said as she laughed.

Moran wasn’t always this jovial. Now 68, she’s been losing her sight for four years. For much of that time, she let herself get depressed — focusing on the skills she loved and missed — painting, reading, baking elaborate wedding cakes.

“I’ve totally changed by outlook since I’ve been here,” she said. Now, Moran has a real understanding of what visual impairment means — and what it doesn’t.

“You don’t lose you intelligence. You’re not senile, you’re not deaf,” she said. “Pretty much, you’re the same as you used to be, except you’ve lost some of your sight.”

As Frank Vance likes to tell people, loss of vision doesn’t mean loss of ability. He’s proof of that — and also the director of rehabilitation services here at ACVBI. He lost all his sight at 15, more than 40 years ago.

But Vance has found the more he involves himself in the world, the more he helps out and learns new skills, the more “the barriers just fall away,” he said.

In the years he’s been totally blind, he’s gotten a masters, had a career, raised a family and always stayed active in his church.

“People know me as a person who does something, makes a contribution,” Vance said, “not just as the ‘blind guy.’”

And isn’t that what everyone wants? To be really seen — beyond some label.

To learn more about the Arizona Center for the Blind and Visually Impaired, visit acbvi.org.