Pay Attention To The Dog Behind The Curtain: Local Pups Audition For The Role Of Toto 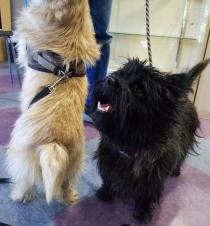 A recent casting call at a local theater asked for energetic, patient and furry actors to apply. A real dog will be cast as Toto in Valley Youth Theatre’s "Wizard of Oz" production.

There’s no place like home, and there’s no business like show business. Where else would you find four dogs perched on front row seats in a theater, awaiting their big break?

“We’re here today to audition for Toto!” Bobb Cooper, the show’s producing artistic director, said to the dogs at the audition this month.

Valley Youth Theatre in downtown Phoenix has cast canines in plays before — "Legally Blonde," "Annie." This will be the fourth time for the "Wizard of Oz." The pups have brought their people with them for the audition, including 9-year-old Blane Nelson who held his dog, Jade, in his lap.

“We don’t know what breed she is because she’s a rescued dog,” Nelson said.

Jade hopped right up on stage when it was her turn. It was time to show her stuff.

“I might be able to get her to roll over,” Nelson said.

Then there was Tito, a one-eyed chihuahua rescued by Scott Musselwhite and his family.

“And this is his first acting job,” Musselwhite said.

“So, how is he off the leash?” Cooper asked.

They released the leash, and Tito scampered off stage left.

But maybe he just jumped ahead in the script, to the part where Toto escapes the Wicked Witch’s castle. Being Toto doesn’t require memorizing a lot of lines, but the right dog will be fiercely loyal to Dorothy, here played by Kendra Richards.

“It’s kind of crazy because it’s on stage the whole time, where a lot of times in shows it runs on and then it runs off,” Richards said. “But I’m really excited because those dogs were just so cute.”

“Having a dog certainly ups the ante a little bit,” Cooper said.

He added the trick is finding what a dog will work for.

“The first time we did the 'Wizard of Oz' at the Herberger, we had a dog named Ivan and his thing was a tennis ball,” Cooper explained. “So Dorothy had the tennis ball in the basket and the dog would follow her everywhere.”

“Geordie, come on! Good boy,” Richards called to one dog during the audition.

Geordie is a champion show dog and a cairn terrier. Trivia time — that’s the same breed as the original Toto. But this one had his own role in mind.

At one point, he zipped off the stage and through the theater seats, round and round like a twister.

Miss Gulch would not approve.

You can see the next Toto in the "Wizard of Oz" at Valley Youth Theatre starting June 9.