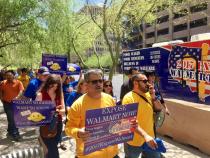 (Photo by Matthew Casey - KJZZ)
Protesters march to the Phoenix Police Department as part of the start to the Expose Walmart Tour.

Local and state lawmakers say repeated police calls to local Walmarts are a drain on resources, but the company said it’s investing in people and technology to enhance security at its stores.

Turnout was low in downtown Phoenix for the launch of the Expose Walmart Tour, which will visit 22 states and culminate next month at the company’s annual shareholders meeting in Arkansas.

Those who did show up marched to the Phoenix Police Department and renamed it the “Walmart Security Headquarters.”

Walmart has had more police calls this year than any business in District 8, said Kate Gallego, Phoenix City Councilwoman who represents the area.

“Hundreds of calls and it is only May,” Gallego said. “Walmart is forcing city of Phoenix taxpayers to pay for security costs that Walmart should be paying itself.”

Crime affects all retail companies, and Walmart is committed to providing people with a safe shopping experience, said Blake Jackson, a company spokesman.

“We’re encouraged by a 35 percent reduction in calls to law enforcement agencies nationwide, on average, since we began implementing Restorative Justice and other crime deterrence programs,” Jackson said.

Phoenix police declined to comment on the claim that Walmarts are a drain on resources. They say officers work closely with all crime victims, including businesses, to make sure suspects get held accountable.

Local and state leaders also called out Walmart for failing to pay its employees enough to live on. They demanded the company increase worker pay and offer benefits.

Arizona State Rep. Athena Salman said one out of four Arizona children live in poverty, one of five kids goes hungry at night, “and I think part of the reason that we see these dire numbers is because corporations like Walmart aren’t paying their workers a livable wage.”

“Hundreds of thousands of (employees) have taken advantage of new opportunities to advance their career, as a result of (Walmart’s) $2.7 billion investment in training, education and higher pay,” Jackson said.