Art Meets Science in 'Beneath: A Journey Within' 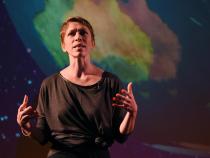 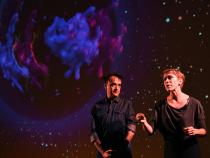 A few years ago, Ed Garnero, a geophysicist at ASU’s School of Earth and Space Exploration, approached Lance Gharavi with the Herberger Institute for Design and the Arts.

He asked him if he would be interested in starting a project that explored the intersection of art and science.

Gharavi said yes and the rest, as they say, is history. The two put together a piece on Stephen Hawking’s book, A Brief History of Time.

Now, three years later, Gharavi and Garnero are partnering again. But this time, instead of looking toward the stars into space, they’re looking into the depths of the earth.

“Beneath: A Journey Within” explores the mysteries that lie beneath the earth’s surface. They’re bringing together a pretty interesting group of people to do it, including a geologist ballerina, a bass-playing geophysicist and a belly-dancing theoretical astrophysicist, among other things.

The Show's Lauren Gilger sat down with Gharavi and Erika Hughes, who directed the show, to talk more about it.