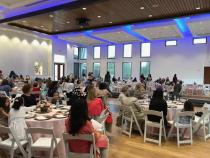 An event aimed at empowering women, some of whom are refugees, took place on Sunday and was organized by the American Muslim Women's Association of Arizona.

It opened with a recitation of the Quran by 10th grader Hanan Hamdan, who has won awards for her recitations. There were also other speakers, a lunch eaten on tables covered with pale pink linens, and even a fashion show for young girls.

Asna Masood said at its core though, the event was about something much bigger.

"The perception out there of Muslims and Muslim women especially, is that Muslim women are very subjugated and they are restricted in many things," Masood said. "Which is a very wrong perception."

AMWA works to support newly resettled refugees in the Valley by providing them with household items and financial assistance, and running programs for women to learn skills like sewing and jewelry making that can provide sources of income.

One of the other speakers on Sunday was 7th grader Huda Mohamed, who came to the United States as a refugee. She shared part of a speech she wrote on the theme of this year's International Women's Day: Be Bold for Change.

"If we continue to stand together, and work equally, then other women will start to pursue their dreams, causing a ripple effect," Mohamed said. She participates in a tutoring program for young refugees called RISE, which is run through AMWA.

AMWA is celebrating its 20th year, and money from the event goes to benefit local refugees.