Panhandling Rules of The Road

By Christina Estes
Published: Monday, May 8, 2017 - 5:05am
Tweet
(Photo by Christina Estes - KJZZ)
This man standing outside a strip mall in Cottonwood told KJZZ he needed money to get home to Yuma. 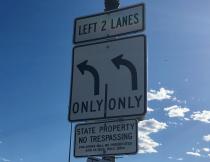 They’re easy to spot as you drive around the Valley: people holding signs asking for handouts. While working on the series Homeless In Plain Sight, many people asked us why there are so many panhandlers and what police and government entities are doing about it. Here’s what we found:

• Asking for money is not illegal. It is protected under the First Amendment.

• In 2015, a state law took effect making “aggressive solicitation” illegal which includes touching someone, following a person or panhandling near an ATM.

• In 2014, Phoenix made it illegal for people to stand on medians, citing safety concerns.

We asked the Arizona Department of Transportation (ADOT) about panhandling, including enforcement of its ‘No Trespassing’ signs. Here is ADOT’s written response:

"Enforcement of ordinances that involve panhandling, including panhandling occurring where freeway interchange ramps intersect with city streets, is handled by law enforcement in a given area. There is no ADOT policy dealing with panhandling, and we’ll refer you to law enforcement for advice on what drivers should do around panhandlers.

'No Trespassing' signs address a variety activities that may occur beyond public right of way at and near freeway interchanges. They also are used to remind pedestrians and those on non-motorized vehicles that entering the freeway itself is forbidden."