Arizona schools will serve about 67,000 students considered English Language Learners (ELLs) this year. And how these kids learn a new language as well as their grade-level curriculum has been the subject of debate for decades. In a special edition of KJZZ's ongoing series Inside Arizona Classrooms, reporters visited two schools for a closer look at why.

It was near the end of a March day in a classroom at Rainbow Valley Elementary in Buckeye, and a bunch of 5-year-olds were busy coloring and cutting out paper dolls shaped like George Washington — a sort of intro to American history.

What other presidents does she know about?

While Elizabeth may not be able to name a president now, that doesn’t mean she hasn’t been learning a lot this year. Back in August, she and her classmates came to school speaking nothing but Spanish. Today, she can say almost all of what she thinks in English - thanks to her teacher, Bedelicia Reyna.

"From now to about April is when you really see a lot of growth, so this is the time of year when I really love my job," Reyna said.

Reyna specializes in English Language Acquisition and has always taught kindergarten. She said they’re like little sponges that soak up her lessons, which are almost entirely in English.

"At the beginning of the year it’s very very hard because they don’t speak English, so a lot of the time I am speaking to them in Spanish, even though I’m not really supposed to," she said. 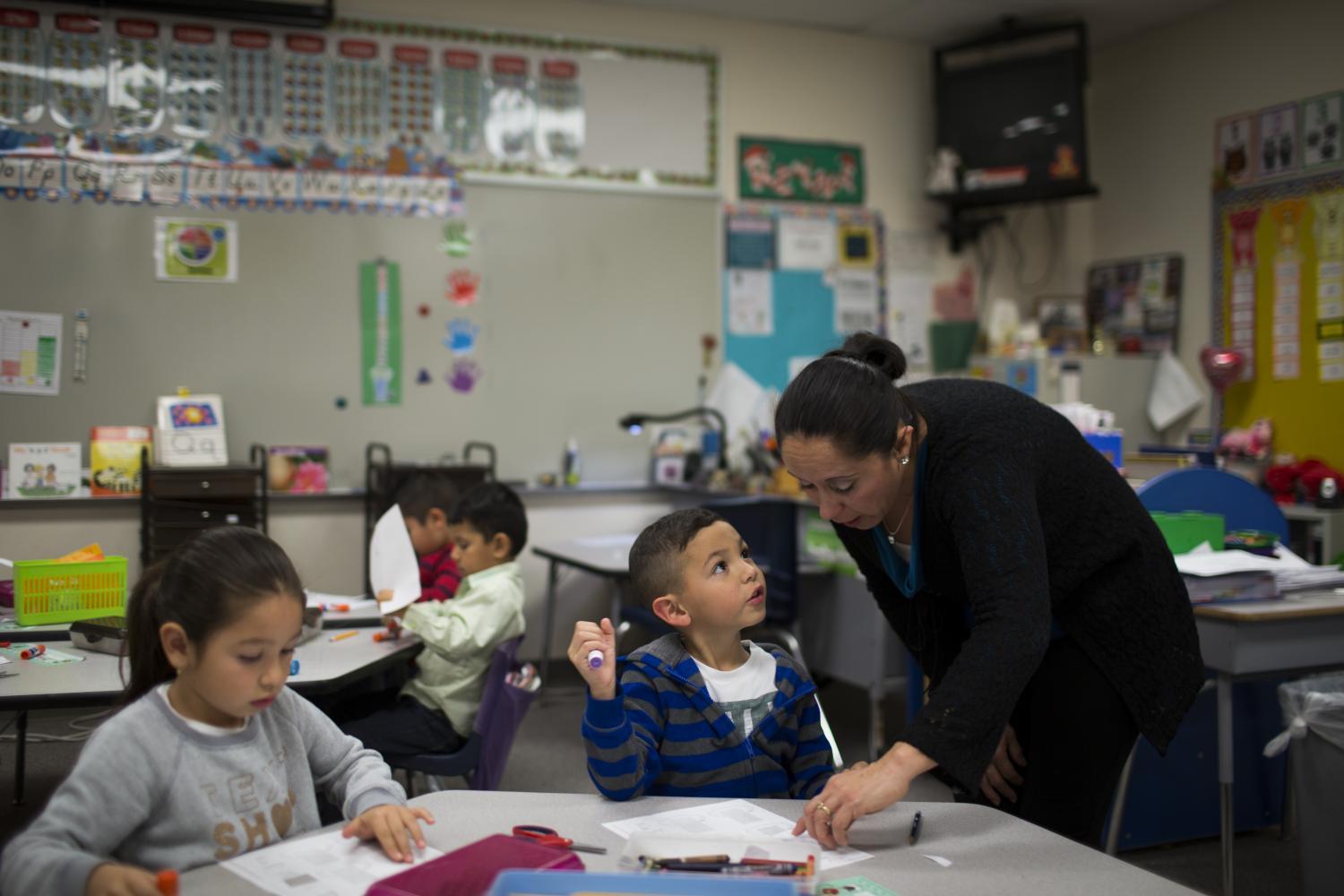 (Photo by Caitlin O'Hara)
Bedelicia Reyna works with her kindergarten student Iker Grijalva on an assignment to identify rhyming words in English during class.

When Reyna first started as a teacher, she was allowed to teach in Spanish part of the week. But, things changed when the state mandated all-English instruction in 2000.

Reyna said what’s also changed since then is how many of her colleagues at Liberty Elementary School District also teach ELL.

"We have great teachers but we don’t have the resources to do something more intensive," said Liberty Elementary School District Superintendent Andy Rogers.

He said the district used to have ELL specialists across the district. Now, Reyna is the only one in her school teaching ELL.

"What we’re seeing is a lot of intermediates," Rogers said.

So while they may not have a specialized class for every grade level, Rogers said they’ve created one very popular program that takes those kids, adds non-Spanish speakers and teaches in both languages — a dual immersion class.

"The biggest barrier for our ELL students is the writing component," Rogers said. "In the immersion, they learn to read, write speak and have the academic vocabulary in both languages."

And Rogers hopes to expand that program to another school. He said more state help in the way of dollars would make a huge difference — which the state says they’re hearing across the board.

If you talk to anyone in the rural school setting they’ll say it’s hard to get teachers and it’s harder for them to keep teachers.

"And then, on top of that, if they’ve trained them to be specialized in [English Language Development], then keeping them is almost twice as hard," said Kate Wright head of the ELL office at the Arizona Department of Education.

That’s because competition is so high among districts, a lot of teachers move to places that can pay higher wages.

Back at Rainbow Valley Elementary, Reyna said it used to be there was a specialized classroom for students mastering English for each grade level.

“And that teacher would focus more on grammar, English and writing — but those positions have been cut," she said.

The shortage of ELL teachers seen at Liberty is happening statewide. In 2006, there were 10,000 teachers in Arizona ELL programs. A decade later, there are about half of that amount left.

And while finding enough teachers to fill the state’s ELL classrooms is an ongoing challenge for administrators, for ELL students in high school, the big challenge is how to earn enough credits to graduate.

For the average student at Central High School in Phoenix, the school day ends around 2:45 p.m. For Hassan Sharif, it’s closer to 4:00 p.m.

"When school is done, I leave late. When school starts, I come early," Sharif said.

Sharif and his family came to the Phoenix area three years ago as Kenyan refugees. At the time, he spoke almost no English. Today, he can confidently add it to the list of languages he speaks.

"I speak Somali, English, Swahili and Arabic," he said.

Sharif is about to graduate, but getting to this point — and learning a new language — was a lot of work. Like most ELL students in high school, earning the credits to graduate with his peers or even before he gets too old to enroll in public high school required a lot of extra classes. 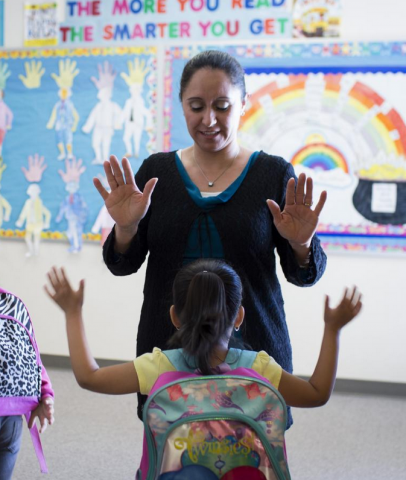 (Photo by Caitlin O'Hara)
Bedelicia Reyna high fives her kindergarten class as they line up to head home for the day.

"I took zero-period classes, then I took ninth-hour classes," he said.

The zero-period and ninth-hour classes Sharif is referring to are periods that Phoenix Union High School district offers before and after school to help any student make up or earn extra credits.

For ELL students in high school, those extra class periods are popular because, in most cases, they get behind on graduation requirements because of what’s known as the “"four-hour model.”

If you can think of a student that has a six-period day at the high school level, four of those six periods are taken up with the four-hour model.

Pletenik said the four-hour model became state policy in 2007. It requires all ELL students to spend four hours a day in English classes until they can pass the state English proficiency exam.

At the high-school level that can be problematic because three of those four hours are considered electives, meaning most of a student's day is taken up by classes that are not academically required for graduation. So they end up with a lot of credits, but not the right credits.

The model was pretty controversial at first. Pletenik and other education advocates claim it’s a big reason behind the low ELL student graduation rate in Arizona, currently about 20 percent — the lowest rate in the United States.

But things have changed a lot since 2007. In 2014, state officials gave schools more flexibility and began allowing them to reduce that four-hour block to two hours for intermediate speakers. They get to move into classrooms with other mainstream students.

Christina Negrete is the English Language Development coordinator and an instructor at Palo Verde High School in Tucson. Negrete said the four-hour model was too segregated for her intermediate students and didn’t give them enough time with their English speaking peers. But that has changed.

"They get to take classes they may enjoy more as far as electives are concerned. And they’re able to get their credits to graduate," she said.

But Negrete said she still finds some value in the four-hour model, especially for students who arrive with no English at all.

"They can really use that time to get accustomed to culture and language, everything that comes with a move to a new country," she said.

But the question of how to effectively move intermediate speakers to proficiency remains a work in progress. Arizona was cited for civil rights violations by the U.S. Department of Justice last year for not having standards rigorous enough for students to pass the proficiency exam. The Arizona Department of Education is working with federal officials to fix that, with a new exam due out next year.

We want to hear from you! If you know a teacher or have a great education story, let us know on Facebook or email Casey Kuhn at [email protected].