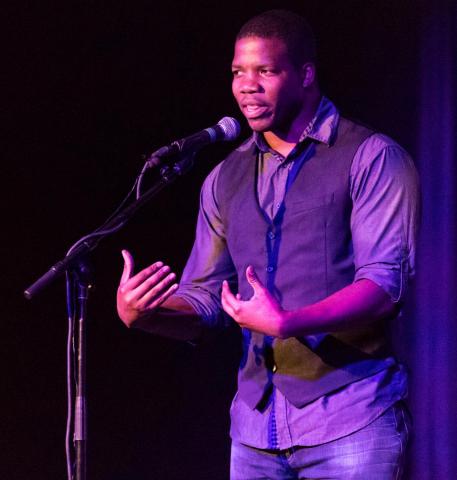 KJZZ is partnering with the Arizona Republic to bring you the Arizona Storytellers series. We record the live events and share them with you on the radio. In Phoenix, the storytellers share stories about our community or the life events that have shaped them. Megan Finnerty is the creator of the series.

Mario Avent was bullied through most of his schooling. One bully in particular repeatedly told Avent that he was a failure. Those words had stuck in his head.

Several years after high school, Avent met a Cirque du Soleil performer. She taught him aerial fabric acrobatics, and he was good at it.

He went to California to join the circus, but he quit. Avent tried selling used cars, but eventually quit that too.

When he was 31, Avent decided to join the Army. During training, he injured his knees and didn’t think he would graduate. But the words of one drill sergeant drove him to finish boot camp.

Mario Avent is an Army veteran living in Phoenix.

The next storytelling event is May 2, 2017, at Arizona Heritage Center at Papago Park in Tempe.