(Photo by George Andrejko/AZGFD)
The PVC habitats can be bent into a variety of shapes to mimic underwater plants.

(Photo by George Andrejko/AZGFD)
Like an Ikea house, some assembly is required. 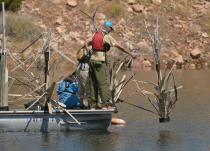 (Photo by George Andrejko/AZGFD)
A weighted bottom and proprietary floating technology helps the habitat stay upright in water and lay down when water level falls.

The work is part of a larger plan, the Tonto National Forest Lakes Habitat Improvement Project, which is meant to improve the sustainability — and fishing prospects — of a handful of central Arizona lakes.

More than 100 years old, Roosevelt Lake is one of several Salt River reservoirs. At first, the natural vegetation flooded by Roosevelt dam provided the necessary habitat, but it has since decomposed, said Dave Weedman, statewide aquatic habitat program manager for Game and Fish.

“Natural vegetation has degraded and broken down, and is basically gone from most of the lower levels of Roosevelt. So, this artificial structure is intended to replicate what used to be there with the natural vegetation that got flooded.”

Made of recycled, eco-friendly PVC, the pretend-plants unfold and screw together like plastic Christmas trees. Each Fishiding HighRise offers 110 square feet of surface area where food can grow, attracting bait fish and the sport fish that eat them.

Weedman said such cover is key for bass and crappie, which are part of the sunfish family called Centrarchidae.

“They use that cover as a way to camouflage themselves or hide so that they can ambush smaller prey species. They also do a lot of their nesting and spawning activity underneath the structures or under cover.”

“They all essentially serve the same purpose, which is just adding some physical, vertical structure to the water column for the fish to use as camouflage habitat and hiding habitat,” Weedman said.

Weedman said that Game and Fish identified Roosevelt as its top priority after troubling survey data and community reports hinted that crappie and largemouth bass in the reservoir were struggling.

“We felt like we needed to do something to improve spawning and rearing habitat, and provide ambush sites for these fish to be more efficient predators on gizzard shad.”

But Roosevelt presents particular difficulties for natural vegetation: like Bartlett, its water level fluctuates significantly over the seasons, killing plants and eroding essential soil around its margins — the littoral region where bass and crappie live.

The lake rose 45 feet under the winter rains, and currently stands at 70 percent full for the first time in five-and-a-half years. But what goes up must come down, and Weedman and his colleagues had to take into account the fact that lake levels will drop again as the Valley draws on its water.

With this in mind, Game and Fish placed the habitats in 50-65 feet of water, so that lowering water levels would bring them into the ideal depth range of 20-30 feet.

“At that zone, they’ll get enough light penetrating that they’ll grow their own layer of algae and periphyton, which will attract small bait fish, and then that in turn will attract some larger sport fish that will hang around and use that cover to ambush the smaller bait fish that are attracted by the structures,” Weedman said.

The project plans to add habitat to other Salt River lakes, including Apache, Canyon and Saguaro, as well as Bartlett Lake, which formed from damming the Verde River. All five reservoirs are managed by Tonto National Forest.