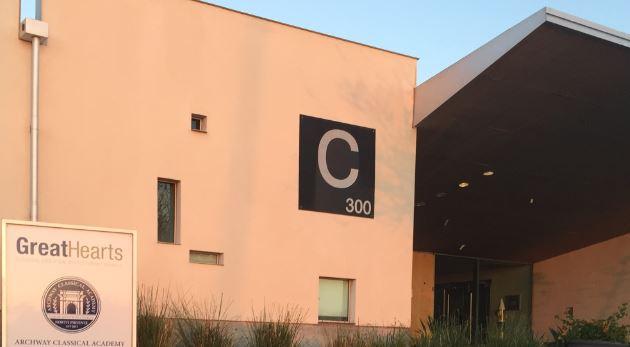 (Photo by Will Stone - KJZZ)
As the legal fight over school policies for transgender students remains unsettled, schools in Arizona like Great Hearts Academies have fashioned their own policies.

When Tim returned for his senior year, he didn’t think identifying as a transgender male would be a problem. No one at his charter school, one of the five high schools operated by Great Hearts Academies in Arizona, had ever mentioned any rules.

But it turned out the board of directors had quietly passed a “biological sex and gender policy” just before the new school year.

“Technically the teachers aren’t allowed to call me by male pronouns or my chosen name,” Tim said.

KJZZ has agreed not to use Tim’s real name or identify the specific school he attends because of his family’s concern for his safety.

Great Hearts Academies is one of the largest, most sought-after charter school networks in Arizona with nearly two dozen schools in the Phoenix metro area and another four in Texas.

The policy, passed in June 2016, not only stipulates that students must use the bathrooms or locker rooms matching the sex on their birth certificates, but it also extends that to school activities, pronouns, even the dress code.

Arizona law requires a written statement from a doctor verifying the person has undergone gender reassignment surgery in order to change a birth certificate. Tim has not yet done that, although his U.S. passport identifies him as a male.

“Even if it was just a few things like the locker room policies and the bathroom policies, it’s just a little ridiculous to me that they are willing to so blatantly discriminate against a certain people,” Tim said while sitting at the dining room table with his mother.

What initially made her want to send Tim was the school’s emphasis on a liberal arts education and instilling certain values in students.

“I thought that Great Hearts was a very inclusive school. They have always had a zero tolerance on bullying,” she said. “This idea of we are great hearted. We see the truth and the beauty in everyone.”

She paused and then added "unless you’re transgender.”

The policy does allow students to use a unisex bathroom, but Tim said that’s often impractical during the busy school day. And while some teachers break the rules and use the male pronoun, for example, he knows other transgender students who aren’t comfortable making that kind of request.

“They don’t want to come out at a school because the school isn’t very supportive with their policies,” Tim said.

Great Hearts would not speak to KJZZ for this story. But the policy spells out some of the guiding "assumptions":

“That there exists no general consensus, but rather disagreement ... legal, scientific, educational, philosophical about the relationship between 'gender identity' and biological sex.”

The policy, which never actually uses the word "transgender," states the rules are “necessary for maintaining privacy rights of students, maintaining safety, discipline and order, and in preserving the educational environment.”

“We want to make sure we set really high expectations for kids that speak to their noble purpose as human beings,” Great Hearts CEO Daniel Scoggin said in one of the charter network’s promotional videos touting not just the curriculum, but its focus on the emotional and moral growth of students.

The national debate over transgender policies has predominantly focused on public facilities like restrooms and locker rooms. Title IX, part of a federal education law passed in the early 1970s, bars discrimination on the basis of sex in schools that receive taxpayer dollars. LGBTQ advocates have argued that applies to transgender students and the question was headed to the United States Supreme Court after a Virginia teenager, Gavin Grimm, sued his school board for the right to use the men’s restroom.

Former President Barack Obama’s so-called “bathroom directive” had instructed schools to let students use the facilities that correspond with their gender identity. But after the Trump administration rolled back that guidance, the Supreme Court sent the Grimm case back to the lower court.

That leaves schools to hash out the divisive issue on their own and that appears to be what some of Arizona’s elected officials would prefer.

Superintendent of Public Education Diane Douglas has said the policies should be left to each school board. Arizona Attorney General Mark Brnovich joined other states last year and sued the Obama administration over its guidance.

The Great Hearts policy suggests that some prominent members of the business community here are also concerned about expanding rights for transgender people.

“The problem that you have when you begin to include gender identity is it becomes very subjective and it is only up to the individual, rather than an objective criteria, as to whether that person is male or female,” said Matt Staver of the far-right Liberty Counsel, which promotes conservative Christian views and often fights against expanding LGBTQ rights.

Staver said other schools should adopt this kind of policy because it clarifies not just restrooms, but also issues like pronouns. Without that guidance, Staver says the classroom can become dysfunctional.

“It really begins to throw a lot of craziness into the educational environment and frankly puts the teacher on edge as a potential target for discrimination when the teacher is not intending to do anything discriminatory.”

Staver argues this is the de facto policy for many schools in the country, but that doesn’t match the experience of Cammy Bellis.

She leads Arizona State University’s Transgender Education Program, which works with schools in the Valley on their policies.

"An exclusionary policy such as that one flies in the face of any of the research we have now that states students fare better, they do better socially, emotionally and academically when they are able to be their true selves,” Bellis said of the Great Hearts policy.

Groups like the American Psychiatric Association agree and support medical care and protections for transgender people.

"We know that trans youth are some of the most vulnerable students on the planet," Bellis said, citing higher rates of mental health issues like depression and suicide.

The mother of Great Hearts student Tim said she feels betrayed by a school that — until recently — she thought was the right place for her son.

“The people who approved this are supposedly community leaders — and I’m just shocked that in today’s day and age, LGBT students are still discriminated against,” Tim's mother said.

But until the country’s highest court decides whether federal law protects someone like Tim, transgender students will be living different realities depending on what school they walk into at the beginning of the day.