Bachata Finds A Beat In The Dominican Republic, Phoenix

A class of elementary school kids in Cabarete sit cross-legged on the floor waiting for Juan Abel Martinez to take them through the bachata basics.

“This instrument used in bachata is called the bongo,” he tells the kids in Spanish, and a chorus of small voices calls back “Bongo!”

In addition to the bongo there are two guitars and a Dominican metal instrument called the guira. It looks kind of like a cheese grater.

Martinez calls for volunteers to demonstrate the dance steps that accompany bachata.

For Martinez, to teach kids about music is to teach them about their heritage, their country.

“Here in this country, there isn’t a celebration without music,” he said.

While Martinez tries to instill traditional music in the youngest Dominicans, Arizonans of all ages have taken interest in the dance that often accompanies bachata music. 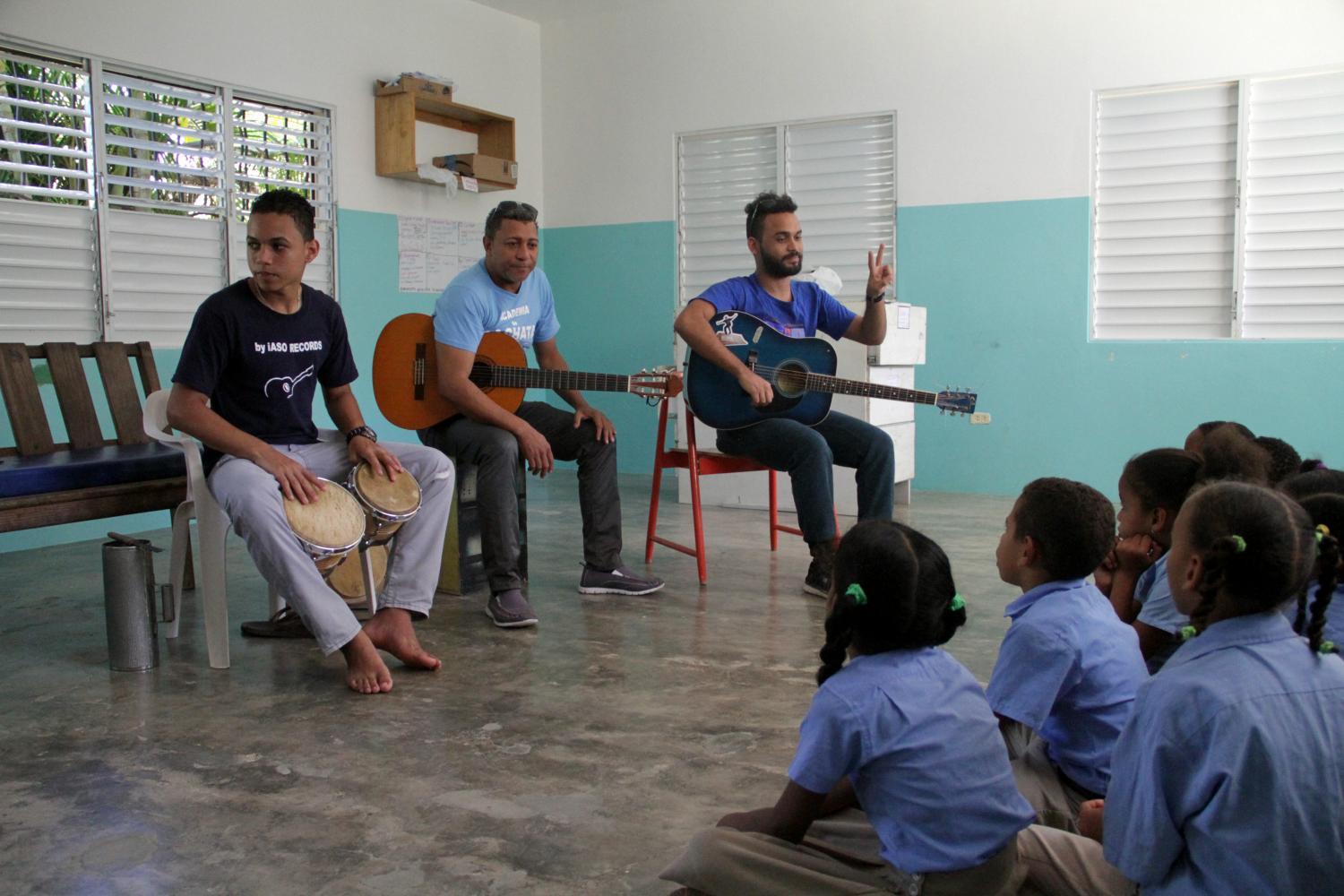 (Photo by Mariana Dale - KJZZ)
A class of elementary school kids in Cabarete sit cross-legged on the floor waiting for Juan Abel Martinez and company to take them through the bachata basics.

Martinez teaches through the Bachata Academy, a nonprofit that draws kids from the nearby low-income neighborhood and puts instruments in their hands.

Kids gather to practice weekly at an unassuming stucco building in Cabarete known as the Bachata House.

“I like the emotion one has to play it,” he said in Spanish.

The school started in 2013 and is the first of its kind in the Dominican Republic.

Martinez is one of three teachers. He’s played percussion for decades.

“Since I was born, I was born in bachata,” he said.

But for years not all Dominicans celebrated bachata, some still don’t. Instead meringue was praised as the fundamental Dominican style of music. Martinez said there was discrimination toward what was seen as lower class music.

(Photo by Mariana Dale - KJZZ)
“Here in this country, there isn’t a celebration without music," said Juan Abel Martinez, a bachata musician of many decades in the Dominican Republic.

“In the genre, there were artists who had lyrics that were then seen as, I don’t know, bad or street music or music for cabarets,” Martinez said.

But attitudes changed. Bachata stars dominate the Latin Billboard charts and have even attracted the attention of stars like Drake.

The Bachata Academy’s founder Benjamin de Menil wants to see an investment made in music like the MLB makes in its Dominican baseball academies.

“So I think if you could have the intensive music program that take advantage of the natural interest in music here, I think you could have some of the world’s finest musicians coming out of the Dominican Republic,” de Menil said.

At this point, Americans are more likely to know the names of U.S.-born bachata stars like Prince Royce and Romeo Santos.

The genres global appeal means, you don’t have to go very far to find it, even in Phoenix.

(Photo by Mariana Dale - KJZZ)
"When you don’t care, that’s when your true self comes out and you’re free and that’s what it’s all about," said Adrien Moya of dancing bachata.

Bachata Addiction at DeSoto Central Market is one of several Dominican dance themed nights that have popped up around Phoenix. The dance style has ridden the music’s rise in popularity.

The night’s co-creator is Brandon Odom, a self-described "white boy from Arkansas" who first learned to dance while deployed to Iraq. When he moved to Phoenix two years ago, he found a Latin dance scene on the upswing. Now Bachata Addiction draws hundreds each month.

“It transcends the culture,” Odom said. “So it’s not just like a Latino crowd or something like that, it’s a big mix of the population.”

There are even a few Dominicans in the Valley.

Adrien Moya helps teach the class some nights. She picked up bachata as a teenager, though without her parent’s approval.

“It was horrible, it was not classy, my parents were totally against it and it was frowned upon for sure," Moya said.

When she moved to the Bronx as a teenager, bachata gave her a way to connect, to find a a group in the crowd. And once she did, she owned it.

“They were dancing bachata in Jordans [shoes], and I was like, ‘Nope. this has to stop. They need to dance in heels and dresses.’ So that’s what happened," Moya said.

Denise Ceballos Viner, or Bella, as her friends call her, is another Dominican transplant.

While she grew up listening to the disco music of the '70s,  when she moved to Arizona, she wanted to connect with her homeland.

“When I play it here, it takes me back home,” Ceballos Viner said. “It reminds me when I go visit and people are sitting outside and playing dominoes or people just dancing in the street.”

And while that may seem intimidating to some, Viner said the goal is for people to come away with self-confidence and a little flair for the Dominican.

Moya has a similar message in her classes.

“Do not care if people are looking at you. Do not give one …” she trailed off into laughter. “When do you don’t care, that’s when your true self comes out and you’re free and that’s what it’s all about.”