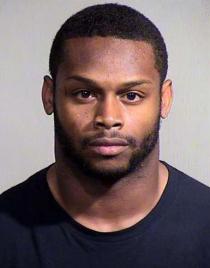 Another NFL player has been arrested and charged with assault. This time the player is a member of the Arizona Cardinals.

Arizona Cardinals running back Jonathan Dwyer has been arrested on aggravated assault charges. Investigators say the arrest is in connection with two altercations at his home in late July. The victims are a 27-year-old woman and an 18-month-old child. One of the counts was "aggravated assault causing a fracture.”

The Cardinals said they became aware of the situation on Wednesday and are cooperating with the investigation. Dwyer has been deactivated from all team activities according to a release from the Cardinals.

Dwyer’s arrest is the latest in the string of cases involving off-the-field violence by NFL players. Also on Wednesday the Minnesota Vikings barred Adrian Petersen from all team activities after he was indicted for negligent injury to a child, stemming from a whipping incident that left his four year old son bruised and cut. The Baltimore Ravens Ray Rice was suspended by the team and the NFL after video surfaced of Rice knocking his then fiancée unconscious.