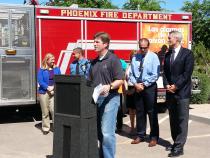 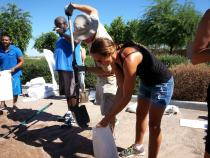 As half a dozen residents filled bags with sand, city of Phoenix officials announced the materials are available to Phoenix residents for free at designated fire stations.

Phoenix city officials said more than 5,000 sandbags were available on a first-come, first-served basis starting at 4 p.m. Monday, but by 5:30 most of the filled bags were gone. Residents can still bring their own bags and start filling them with sand throughout the day.

“They are available at 11 fire stations throughout the city of Phoenix. If you need sand you gotta bring your own shovels and medium size garbage bags. We also recommend you double bag. If you go to Phoenix.gov you can find out which fire stations in your neighborhood have sand and sandbags," Phoenix Mayor Greg Stanton said.

It’s an effort to help residents protect their homes and businesses from the rain expected Tuesday.

Roger Shriner and his wife Erin spent $3,000 in home repairs after one of the storms in August. The south Phoenix residents arrived at the fire station near 19th Avenue and Dobbins Road and filled 20 sandbags.

“At least this one we know it’s coming because the first one we just didn’t realize that it was gonna be so severe," Shriner said. "Now we don’t take any rain lightly, especially not rain from a hurricane.”

The city of Scottsdale also has sandbags available for residents on a first-come, first-served basis. The bags are located at the city's north Corporation Yard, 9191 E. San Salvador. There is a limit of 10 bags per household.  Call 480-312-3111 to see if sandbags are available.

The City of Mesa Solid Waste Department will be delivering roll off bins with sandbags to the following neighborhood locations: