Commentary: This Is The Best Phoenix Mercury Ever 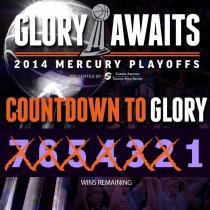 (Photo via @PhoenixMercury on Twitter)
The Phoenix Mercury are seeking their third WNBA Championship.

The Phoenix Mercury aren't just seeking their third WNBA Championship. They are on an unending quest for perfection that has elevated their play to record-shattering levels.

But what makes the Mercury are so good…is that they never think they're good enough. They smoked the Chicago Sky in game 1, winning by 21 points and setting a record for highest shooting percentage in a finals game. But after the game, the first thing Diana Taurasi mentioned was the number of Mercury turnovers…and Brittney Griner criticized herself for making fouls. Coach Sandy Brondello expressed disappointment that the team played really well for only 30 minutes instead of 40. Even when the Mercury are up by 20 points in the fourth quarter, she's screaming from the sidelines like the game is still at stake.

That perfectionist work ethic emanates from Diana Taurasi, widely considered the best basketball player on the planet. Kobe Bryant calls her “The White Mamba.” She does things on the court that make you go “whoa.” She hits buzzer-beaters from half court. She sinks 3-point shots all day long. She makes precise cross-court passes without looking. She makes the impossible look easy. But what really makes her so good is that she is the ultimate team player; she makes everyone on her team better. And she's tough. When Griner sustained a cut over one eye during game 2 against Chicago, Taurasi told her, “You've still got one eye. Get back on the court.” And she wasn't joking. That's her warrior mentality.

And as a fan who's been there for both of the Mercury's previous two championships, I can say this is the best Phoenix Mercury team ever. They are unstoppable. They will be a dominant sports dynasty for this city. Diana Taurasi could have a championship ring for every finger. This team has single-handedly revolutionized women's basketball. The women's game has always been more of a physical chess match than a brute force display of athleticism, but what makes the Mercury so exciting is they do both. And fans can feel the players' passion. We watch them scream, pump their fists, bump chests – and that fire and personal intensity just ignites the fans in the arena at every game.

The Mercury call their fans the “X-Factor,” because they bring so much energy to the arena…along with a strong “not in our house!” attitude. When you're in the stands at a Mercury game, you are legion watching legends. You feel mighty. You are in the buzzing, electrical aura of greatness.

Niki D'Andrea is the managing editor at Phoenix Magazine.