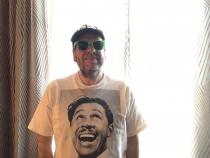 In addition to seeing as many bands as you possibly can over the course of the week, South by Southwest (SXSW) also has speakers and panels during the day.

It’s a really good opportunity for people from across different parts of the music world to get together and discuss things that are happening in what is a very rapidly changing industry. One of the panels on Thursday was called “Do Music Journalists Matter Anymore?”

“In the world in general of course you do wanna find out if the Russians are infiltrating America and our whole way of democracy is at threat, but I have to say to a lot of people like me, what’s happening in music or what are musics that will make our life worthwhile is as important, if not important to that," said Gross. "And I know that sounds crazy, but that’s how it works for music fans.”

Gross moderated the discussion and asked other big picture questions — what should be the role of a music journalist? Who can call themselves one? And does it matter? Getting at these answers is complicated, since many people writing about music don’t work for traditional media outlets.

“Even if it doesn’t reach a mass audience that doesn’t mean it’s not valid. There’s still a lot of worth [for] things that are underground, musically and journalistically of course," said Gross.

Other topics included the role of storytelling in music journalism, and how the field can keep up with rapidly changing technology.

The Show
An Interview With Jason Gross
The Panel