Trump Border Wall Could Have Big Consequences For Animals, Habitat 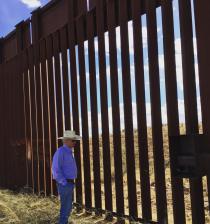 (Photo by Will Stone - KJZZ)
Arizona rancher Tony Sedgwick worries one of the many casualties of a Trump border wall will be the wildlife that depend on this rich habitat along the border. 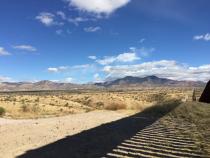 (Photo by Will Stone - KJZZ)
The U.S. Mexico border outside of Nogales, AZ.
(Photo courtesy of Bureau of Land Management trail camera)
Only a few jaguars have been spotted in Arizona in recent years, but a border wall could be one more obstacle for the endangered animal. 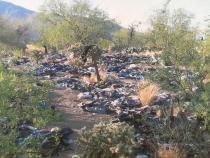 (Photo coutesy of Pat King)
A photo taken by Pat King on her ranch north of the border about ten years ago. King said the garbage left by people illegally crossing is also impacting the environment around the border.
Will Stone - KJZZ News
Rancher Tony Sedgwick looks for animal prints on a section of the Arizona border where animals are still able to cross.

A border wall wouldn’t help Tony Sedgwick sleep better at night. In fact, the Arizona rancher balks at the idea.

Sedgwick’s family has ranched along the border outside Nogales since the 1950s. Not only does he believe the kind of wall President Donald Trump has called for would be a huge and ineffective waste of money, but it also would threaten so much of what he loves about this rugged stretch of the border.

“I ride down through this valley late afternoon, and I hear the hawks, and it’s just the most beautiful place in the world,” said Sedgwick, a self-described conservative.

He has watched the land around his ranch change just as the United States’ relationship with its southern neighbor has since Sept. 11. Fencing and roads have sprung up with seemingly little consideration for the impacts on the habitat here, he says.

The border spans nearly 2,000 miles and is one of the country’s most biodiverse regions. The proposed wall — assuming it runs the entire span of the border — could affect more than a hundred endangered species: jaguars, Mexican grey wolves, plus a host of migratory birds.

“It’s just an arbitrary line that’s drawn across a very diverse region,” Millis said, standing next to Sedgwick on the gusty ridge. “It severs and destroys habitat for wildlife. We have animals that aren’t able to move across the border.”

And it’s not just wildlife that have trouble getting around because of barriers. It’s water, too.

Millis and Sedgwick head down to the riverbed where the current fence gives way to smaller vehicle barriers. It’s the only viable crossing place for animals within more than 10 miles.

Sedgwick gestures to some twisted steel and debris — evidence of damage done by flash flooding.

“This isn’t clear water whipping down the river. It’s a roiling dark mess.  There are dead cows in there. There are trunks of trees. There are cars. It’s extraordinary – the power,” Sedgwick says.

Erecting an “impenetrable” wall may only exacerbate these problems.

“It would be a dam. It would be toppled. It just wouldn’t work at all,” Millis said.

This isn’t hypothetical. In 2008, Nogales, Sonora experienced severe flooding, leading to millions of dollars in damage and two deaths because of a wall there.

But for others living on the border in Arizona like Pat King, who voted for Trump, the first thought is safety. Her family has ranched in the Altar Valley for more than a century.

She recounts one harrowing story after another — drug busts, bodies found on their land, people, destitute, wandering into their home.

“The horrors that went on — we’d have women come in, and they were holding each other’s hands. And they just had a death grip. We would assure them that you’ll be OK,” she said. “They must have gone through hell.”

It’s not that King doesn’t care about the environment, though. She’s part of a local conservation alliance in the valley and pulls out a photo from ten years ago, depicting heaps of trash, strewn across a patch of desert, the remnants of people making their way from Mexico.

“It was about a four hour walk from their pick up point,” King said, “It was just enormous, and you didn’t even walk on the ground; you were walking on all of this stuff.”

She said the trash left from people illegally crossing has also impacted their cattle. But the situation on their ranch, which is about 30 miles north of the border, has improved recently. Illegal crossing has gone down in recent years due to economic conditions. She also credits the new fencing and security that was put in place south of them.

“It’s unsightly, we’d rather not have it, but it’s hardly the biggest problem,” McManus said.

The real environmental damage comes from “uninformed and uncontrolled enforcement of border security,” he said.

Before moving to Tucson, McManus and his wife Dinah Bear, an environmental attorney, spent much of their careers in Washington working for the federal government.

They both believe the border has become an almost lawless region. But for the very opposite reason as pro-wall people like King.

“The largest waiver of law in American history was passed by Congress for border barriers in 2005 in the Real ID Act,” Bear said.

More than 35 laws can be bypassed in service of securing the border.

“Normally under the Endangered Species Act, the border patrol would have to consult with the U.S Fish and Wildlife Service. How do we best avoid as much damage as possible while still achieving the goal of the project,” Bear said. “They don’t have to do that.”

Put differently: “This is like a country in which the laws don’t really matter.” McManus said.

While accommodations can be made for wildlife, McManus said there’s still not enough known about how animals react to barriers on the border — even ones they can get through.

But Jim deVos with the Arizona Game and Fish Department said the reality is that wildlife already encounter all kinds of barriers because of development in Southern Arizona.

“It would be easy to assume doom and gloom, but we have managed around a lot of different obstructions and helped wildlife get across,” deVos said.

And border walls or fencing may not be the only thing stopping animals. deVos says the Sonoran Pronghorn they have tracked aren’t traveling very much between the U.S. and Mexico, but that’s most likely due to a major highway south of the border — not a wall.

“Wildlife surprise us. We find mountain lions in downtown Prescott and crossing the highway near Tucson,” deVos said. “I can’t say it’s an insignificant issue, but it’s an issue we have been able to work with," deVos said.

Jesse Lasky, a biologist at the Pennsylvania State University who studied the possible impacts of a wall, said smaller, localized populations of endangered animals could also be in jeopardy.

"They may disappear from a disturbance or a disease, but over the long term, if you are having organisms dispersing across the landscape, they can recolonize and re-find those populations,” Lasky said.

“If that were stopped across the border, we would be concerned some of those species might go extinct,” he said.

Lasky said it’s difficult to estimate just how many animals could suffer because of a wall, but “completely sealing off the border would be a big problem for a lot of species.”