As A Black Native American, Arizona Woman Had To Prove She Was 'Native Enough'

Download mp3 (6.31 MB)
(Photo courtesy of Roicia Banks)
Roicia Banks with her mom on the day she graduated from her master's program. Today Banks is confident in her self-identity, proudly African-American and Native American. 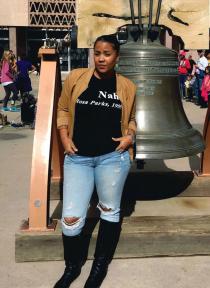 Roicia Banks went to graduate school in Texas, and when she was there, people said to her, “Natives still are alive?”

Natives, as in Native Americans.

Laughing, she continued, “Are you kidding me? Yes, we're alive.”

Banks, who is from Arizona, is undeniably a modern American woman. She is also Native American.

And although — until the Dakota Access Pipeline protests — Native Americans as a modern people rarely graced the national headlines or broke into the modern American psyche, many do lead lives, on and off reservations.

Banks grew up primarily on a reservation. She’s culturally Hopi and registered in a tribe — just a different one than her adopted family. But although she was entirely brought up in Hopi culture, even on the reservation, there were times where she was treated as if she didn’t belong.

She's racially mixed — black and Native American — and on the reservation there was not a lot of diversity. In school, the kids would bully her, she said, taunt her with, “Oh, you have sheep’s hair.”

People would call her the N-word — in and out of school.

She said growing up was centered around proving that she was “Native enough” to belong to the culture that she belonged to.

“I was always working twice as hard as the next person to be as good or better," said Banks.

She got good grades, learned the language quicker than her siblings, knew her history, the ceremonies, in order “to prove that I am worthy. I am Hopi. I belong. Just because I might be racially identifiable as black, hey, I’m your sister. I’m included, too.”

At home, she was especially close to her mom and grandfather. But no one in Bank’s immediate family was black either, and sometimes family members would crack stereotypical jokes about her liking watermelon or fried chicken. She said there were so many subtle and not-so-subtle messages in popular culture, school history books and at home, that said being black was just not as good.

In her high school, there were a couple younger girls who were also black and Native American. And she said they became inseparable, because they understood what living that reality meant.

“We had all suffered some sort of racial discrimination on our native American side that We’re all able to say, ‘Oh that happened to me, too,’" she said. "Like the teasing, the bantering, the hair the scrubbing your skin raw because you want it to be lighter.”

After high school, Banks got a scholarship to college, and with confident black female professors, role models, mentors, friends and a lot of studying, her negative sense of identity started to change.

The fact that there are black Native Americans is not unusual. Historian Arica L. Coleman said the two groups have mixed since the beginning of modern America.

What’s also not unusual? The racism.

“The racism within Native communities is — it’s intense,“ Coleman said.

That has to do with how white colonizers defined race, as a hard and set thing, how they defined racial hierarchies and what she describes as "the myth of racial purity."

In the United States, she said the idea was, "blacks are tainted — their blood, their biology is tainted, and so you don’t want to be tainted, do you?"

A person could be “guilty” of being black with just one drop of black blood or simply by associating. When native tribes were given land by the U.S. government starting in the 1800s, Coleman said they were told, “If you are going to mix and mingle with these people and bring them into your tribe, that means that you are no longer Indian. You are black and you have no right to these lands.”

Today, an open conversation among Native Americans about racism is still touchy if not, taboo.

“To see yourself as a participant in the colonialism that you say you hate is a problem," Coleman explained.

Especially, if you are ongoing victim of institutionalized discrimination, like Native Americans.

And amongst African-Americans, saying you’re part Native can be problematic, even though there is a long history of African Americans of Native descent.

“The interpretation is that, 'So, you don't want to be black? So, you think you’re better than everybody else?'” said Coleman, who is also of black and Native descent.

Banks has dealt with that, too.

Today, Banks has her bachelor's and master's degrees, not a common achievement for a kid from her hometown. At 27, she’s a social worker, is involved with activism and also mentors Native American women.

She has become confidant in who she is.

Frustrated, Banks continued, “I definitely don't have to choose. I’m definitely both, and if you can’t get down with that. Then that’s your problem."

“I had to work really hard to figure out who I am and embrace who I am," Banks said.

In January, Banks was invited to speak at the Women's March in Phoenix, as a representative of both African-American and Native American women.

She has actually always been interested in politics, and she dreamed, even as a kid, of being president.

And a black Native American female president? Maybe one day, in the not too distant future, this country will be ready.

EDITOR'S NOTE: This story has been modified to correct the spelling of Roicia Banks' name.