A Closer Look At Phoenix's Slice Of The Pizza Industry 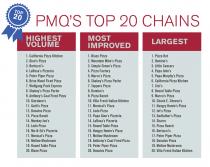 When it comes to food favorites in Phoenix, Mexican often comes to mind. But the Valley’s reputation as a pizza place is rising. In February, "Travel + Leisure" readers picked Phoenix as the top spot in the country for pizza. Our variety of choices is a big reason why.

“I would say up until that point most James Beard winners were highfalutin chefs in fine-dining restaurants,” Walters said.

There’s no pomp or pretense when Bianco talks pizza. Just plenty of passion. A few years ago, health issues forced him to cut back on time around the oven, but Bianco still puts in regular shifts, “spinning circles," as he calls it.

“People like to have fun, they love a game room when they’re ready for it, but when it intrudes on everything with no order, no wayfinding, it becomes chaos, and that’s not parent-friendly,” Greenwood said.

So far, about half the company’s 41 Arizona restaurants have been redesigned with different layouts and materials. The company also replaced its logo, dropping the purple and gold pizza slice for a new color combination and shapes that convey various foods.

“There are so many opportunities to grow today,” Greenwood said. Like increasing carryout orders, holding school fundraisers and attracting more diners like Rick Rodriguez.

“I don’t know what the hell they do back there, but it’s good,” Rodriguez said. He and his co-workers are regulars at Peter Piper’s all-you-can-eat lunch buffet.

He also publishes an annual state of the industry report. Green said the hottest segment in the country’s $44 billion pizza market is fast casual.

“They’ll be limited toppings on them,” he explained. “But you’ll get it made right in front of you and since it takes two minutes to actually bake in the oven, it won’t be but five minutes before you're sitting down eating your lunch.”

Walters has been watching the Valley’s pizza scene.

“In the last two years, almost 50 new pizza places have opened,” she said.

They include independents like Saffron Jack, which started as a food truck, along with chains like Marco’s. The Ohio-based company wants to franchise about 30 locations in the Valley, while Papa Murphy’s, the largest take 'n’ bake brand, hopes to open another 24.

And, you can thank our neighbors from the Midwest for the recent additions of Chicago deep-dish favorites like Lou Malnati’s, Giordano’s and Gino’s East.

But, can they all survive? Green said independents make up 55 percent of the pizza industry, but only 42 percent of total sales. To compete with the big chains, he said indies need to up their technology games and focus more on digital ordering and social media, areas where delivery giant Domino’s dominates.

“They’ve had a tremendous rise in their stock prices over the last eight years,” he said.

“Here’s some breaking news for you. Great restaurants rarely make a ton of money,” Bianco said. “That’s just a fact."

He explained that supporting organic growers and local food systems, while paying people good wages, is not cheap. But, it’s his way, and he’s sticking with it.

“What makes good things good is up to you,” Bianco said. “I don’t really believe I need to kinda put anybody else down.”

Pizza, it seems, can spark as much emotion as politics and sports. But, here’s an important distinction. Most pizza lovers — while disagreeing about the best style, chain or chef — usually agree that even average pizza is still pretty good.

.@TravelLeisure says #Arizona is a pizza destination (https://t.co/QLKKOQfffT). So, we wondered, what's your favorite kind?