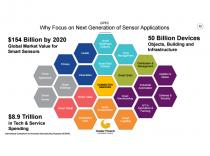 Detroit is known for cars, and Phoenix could be known for sensors. Wednesday, the Greater Phoenix Economic Council will unveil the Metro Phoenix Global Investment Plan. It’s part of an initiative through the Brookings Institution to help regions create strategies to support sustainable economic growth.

In an exclusive interview with KJZZ, GPEC President and CEO Chris Camacho said the region will brand itself as an international leader in the Internet of things and sensor application technologies.

In simple terms, sensors detect changes and send information to computers while the Internet of things relates to anything with an on and off switch that connects to the Internet. Camacho said legacy industries like aerospace and defense, microelectronics and healthcare will help position the Valley as an emerging sensor hub.

“For example, Intel’s Internet of things business is in Chandler, Arizona. Most globally have no idea that exists in Chandler, Arizona,” he said. “We have so much of this ongoing, already invested in our market and yet the global markets are unaware. So our goal is to raise the reputation, raise the notoriety of the great things already happening in greater Phoenix at the same time using that as a lever point to then bring new investment and to complement the existing supply chains that do exists.”

Camacho said they will launch domestic and international digital-marketing campaigns with the biggest foreign opportunities expected to come from Taiwan, China, the United Kingdom and Germany. But, don’t expect to see one huge company move its corporate headquarters to Phoenix. Instead, Camacho said, we can expect smaller moves to generate steady growth.

“They expand with a very controlled strategy into the United States,” he explained. “They might add an engineering office, a sales office. These are generally 15 to 50 person expansions into the U.S., to prove the market demand, prove the supply chain, and then the growth will come.”

Aside from tourism, Camacho said business leaders from other countries have a neutral perception when it comes to industry in Phoenix.

“I look at it as a positive,” he said. “We don’t have a negative stigma like you might see in some of the Midwestern markets or northeastern markets. Phoenix is a very young community, a high growth community, a very diverse population base and, as a byproduct of that we can build the global identity.”

Marketing campaigns will focus on future industries while highlighting the region’s legacy industries. The Metro Phoenix Global Investment Plan calls for the area to be recognized as a sensor cluster in key European, Asian and North American markets by 2027. It also includes the creation of a full concierge attraction and aftercare program to all international locates by 2020.