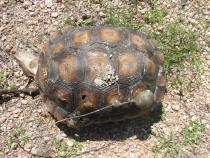 Officials at the Arizona Game and Fish Department are investigating the shooting of a desert tortoise, a protected species. The animal was part of a lengthy research project and the agency is concerned the killing could affect their study.

Game and Fish is asking for the public’s help. Officials say one of the desert tortoises they had been tracking for a study was found shot near the Beeline Highway north of Fountain Hills.  The agency says the reptile was one of 15 juvenile tortoises affixed with a transmitter. The study is the first-of-its kind and researchers are monitoring juvenile tortoises' habitats and habits.

Cristina Jones is with the Arizona Game and Fish Department. She says the female tortoise was observed alive in mid-August and was found dead on the 25th.

“It is illegal to harm tortoises in any way ‘cause they are protected by the state. It’s truly unfortunate to lose any tortoise, but this tortoise was the second one that we added to our study in July of 2010. So, we have almost the most information that we have gained from this one in particular,” Jones said

Jones said anyone with information about the killing of the protected tortoise should call the Game and Fish Department.