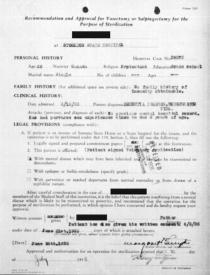 (Photo courtesy of Dr. Alexandra Minna Stern)
An example of the records in the Eugenics Rubicon, which shows the form recommending a man for sterilization in 1935. 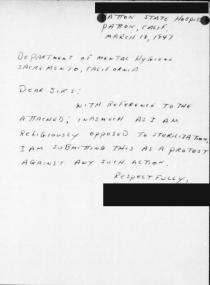 (Photo courtesy of Dr. Alexandra Minna Stern)
An example of a protest letter from a person who was recommended for sterilization in 1947.

We often talk about not repeating history when it comes to the genocide carried out during World War II, or the inequities of Jim Crow Laws. But, one part of our country’s history that often seems lost are the slew of eugenics laws that made forced sterilization legal during much of the 20th century.

By the 1970s, at least 60,000 people in the U.S. had been sterilized, according to Jaqueline Wernimont, assistant professor of English at ASU.

“In 1909, California Legislatures passed a law that authorized medical superintendents to sterilize anyone that they thought was unfit for reproduction,” she said. “And, essentially, the notion was that you were building a better quote, unquote ‘breeding pool.’”

Wernimont is now working with colleague Alexandra Minna Stern at the University of Michigan to bring that forgotten history to light with the Eugenics Rubicon, a digital history of eugenics in America.

Wernimont said she hopes the project allows people to experience this dark part of our nation’s history. They use archival documents, visualizations, and even sonifications of these records, in which each note represents one person who was recommended for sterilization.

“One of the things we do in reparative justice work is we want the people who have been harmed to tell their own story in their own words,” she said. “This is incredibly difficult to do in this particular case because a great many of them are dead.”

So, they’ve used protest letters from people who were against their ordered sterilization, as well as other kinds of documentation where the victims’ words were written down. There is also a photographic essay tied with some of the categories under which people were recommended for sterilization, Wernimont said.

Eugenics started with animal sterilization, but changed, as states adopted eugenics laws to sterilize those with mental illnesses, or those who were considered less fit for reproduction in the early 20th century, she said.

And, Wernimont said, certain groups were targeted in this, especially those who appeared to be Latino or Latina.

“In the beginning, sterilization of men was more common, because it was an easier surgery,” she said. “But then you have, as time goes along, you have an increase in the sterilization of women and a lot of this is tied to certain kinds of racial ideologies.”

California’s eugenics law was repealed in 1979, but there was a significant drop off in the late 1950s, she said, “in part because there were significant protests, particularly by women of color.”

Wernimont said she not only wants people to know that these practices happened here in America, but that our governments and universities were wrapped up in these practices.

She also wants people to think about what America would have looked like if this had never happened.

“I want people to be alive to the fact that it could happen again,” she said. “If people think this thing could have never happened here and yet it did, 60,000 people at least. I think that means that it’s possible that things could happen again.”