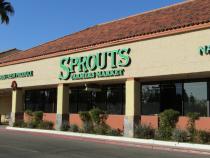 Research by commercial real-estate firm CBRE says more than 1.3 million square feet of new retail space opened across the Valley last year. That’s more than double the year before, but still a fraction of the pre-recession peak.

“The building that we’re seeing right now is sustainable growth, and we don’t expect construction to go back to those levels we saw pre-recession because the retail market has evolved, which is primarily the result of e-commerce and therefore, demand for retail space has softened,”she said.

Most of last year’s new retail involved new Sprout’s and Fry’s Food Stores in the southeast and West Valleys. Glick expects this year to be a repeat. The areas with the least new construction include Scottsdale, Tempe and Paradise Valley.

“Though that’s not a reflection of soft retail demand, it’s really more of a reflection of the lack of land available for development there,” she said. “There’s interest but there’s not space for new development so there is still space for retailers to move into vacant space, existing retail space.”