In Phoenix, A Show Of Solidarity With Ferguson 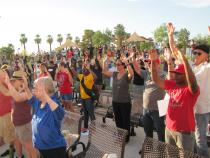 (Photo by Sarah Ventre - KJZZ)
Demonstrators at Eastlake Park's National Moment of Silence event raise their hands in the air in solidarity with demonstrators in Ferguson, Mo., and across the U.S.

Dozens of vigils across the country took place Thursday evening in a National Moment of Silence, including one in Phoenix at Eastlake Park.

This comes in response to police action surrounding the death of 18-year-old Michael Brown who was shot and killed by police in Ferguson, Mo., on Aug. 9.

Before demonstrators observed a moment of silence at Eastlake Park, they chanted in solidarity, said a prayer, and shared personal stories of racial profiling or harassment they say they experienced from law enforcement.

Tia Oso of the Black Alliance for Just Immigration organized the event. She said that the focus wasn’t only on what happened in Ferguson.

Oso also said she hopes people will see this as more than just a matter of race, but as a human rights issue.

After violent clashes between demonstrators and the St. Louis County Police in Ferguson earlier this week, Missouri Gov. Jay Nixon ordered the highway patrol to take control of law enforcement in the city.