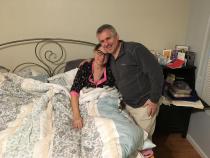 (Photo by Casey Kuhn - KJZZ)
Brett and Anne Levy hug while Anne rests after a hysterectomy. 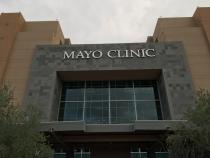 (Photo by Casey Kuhn - KJZZ)
The Mayo Clinic in Scottsdale.

It’s officially the new year, and as the calendar resets, so too do health-insurance deductibles.

For many, that means cramming in surgeries at the end of the year, and around the holiday season. That means doctors, hospital staff and patients all feel the added stress at an already hectic time of year.

Patients and guests alike browse a full-to-bursting hospital gift shop a day before Christmas Eve while the hospital staff rush to check out the growing line of customers.

It’s one small slice of a bustling hospital where patients and doctors are doing their best to fit in as many surgeries as possible before Jan. 1.

Mayo Clinic oncologist Richard Gray said this happens every year, and it means coming in earlier and staying later to help his patients.

“Today I worked in two extra patients that were in need of having surgery and had a cancer diagnosis," Gray said. "And obviously we’re stressed over the cancer diagnosis but at least in one of the two cases was also trying to make sure she could get something done before the end of the year.”

And when asked just how many extra patients he’s fit in since Thanksgiving?

“Too many to count," Gray said, smiling. "It’d be a regular thing throughout the year of always at least fitting in two or three extra people per week. That’s probably at least doubled over this recent time period.”

Gray’s patients are getting expensive cancer treatment, and just one day of difference in scheduling for them would cost them thousands of dollars and even more time-consuming paperwork.

Patients Rush To Get Surgeries Before New Year

Down the street in Scottsdale, Anne Levy just got back from the hospital.

“Any health patient will tell you the last thing you feel like dealing with when you’ve had surgery, or you’re about to and you’re worried about it, is to fill out all these long forms," Levy said. "You feel like you're begging to be taken seriously, like why don't you believe me?"

Her husband Brett Levy picked her up after a hysterectomy just a few days before Christmas.

It was her second major surgery this year – the first was knee surgery after an accident in the summer.

“The actual medical bill for the one surgery, the knee surgery, was in the $60-70,000 range," her husband, Brett Levy said. "That includes the hospital, and the ambulance was over a thousand for a six mile drive.”

Anne Levy is a middle school teacher, and can’t afford to miss as many days of school as she did. She said she would have rather waited to get the hysterectomy when she had more time to recover.

“It’s been a really rough year, and of course Brett and my coworkers and students take care of me, but the insurance is enough to drive you crazy and having to squeeze in a surgery before the year’s end was very anxiety-enducing,” she said, lying in bed, recovering.

Levy scheduled the hysterectomy in 2016 to avoid paying the $6,000 deductible again in the new year. She feels lucky with her relatively low deductible.

“But it’s not chump change for us.”

Before the insurance can be paid, and the forms filled out, the operating room has to be prepped and readied for patients like Levy. And that’s where a surgical technologist like Alison Wilson comes in.

“We help the surgeon by retracting, sometimes assisting, handing instrumentation, really being their right-hand person,” she said.

Wilson, who also teaches future surgical techs, said her career field is seeing a shortage, which puts the burden of packed holiday surgery schedules on the staff and the cost on the hospitals.

“There is a shortage," she said. "Some other people would say that there isn’t but I really do think there is. If you go to a lot of facilities you’ll see they're being shorthanded more often and using travelers who come from all over the place who are much more expensive than to hire someone from within their own area.”

And when the holidays hit, as they do every year, surgical techs feel the stress.

“When it gets towards the end of the year, that real busy time, then they just work them to death, for lack of better words,” Wilson said.

But Wilson said the fulfillment of the job makes it all worth it.

“That’s the most important thing," she said. "Every single day we’re saving somebody’s life in some form or fashion.”

Despite the stress of the holidays, at the end of the day, the best gift hospital staff can give their patients, is the gift of health.