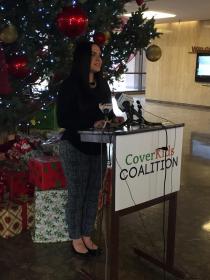 Repealing Obamacare without a comprehensive replacement could leave some of Arizona’s most vulnerable without coverage, especially for behavioral-health services.

That was the message from a group of children's advocates gathered in Phoenix on Wednesday.

The Affordable Care Act has significantly increased the number of insured children in Arizona. If repealed, the law could impact more than 270,000 kids, according to new numbers from the Urban Institute. That includes KidsCare, the state's Medicaid expansion and the federal health exchange, all of which are directly or indirectly tied to the health-care law.

"If you lose any of that coverage, you lose behavioral-health services at the same time," said Dana Wolfe Naimark of Children’s Action Alliance. "(These services) help prevent child abuse and neglect."

Wolfe Naimark says Arizona's overwhelmed foster-care system, with more than 17,000 children, could be one casualty of a repeal.

For example, when Desaray Klimenko, who is now a social worker, aged out of foster care, she had no health insurance. A year and half later, she found herself unexpectedly in surgery.

“I ended up incurring thousands of dollars in debt along with numerous phone calls and letters from debt collectors that affected me gravely for years," Klimenko said.

That was in 2009 before the Affordable Care Act. The law now specifies that people who leave foster care when they turn 18 can stay on the state’s Medicaid program Arizona Health Care Cost Containment System until 26.

Parents of foster children could also lose coverage because they are considered “childless adults.” Arizona's Medicaid had stopped covering that group until Obamacare, when then-Gov. Jan Brewer expanded the program.

“If we lose that, kids will be stuck in foster care a lot longer and may never be reunified with their families,” Wolfe Naimark said.

Wolfe Naimark said this scenario assumes repeal without replacement, pointing to the 2015 legislation passed by Congress and vetoed by President Barack Obama.

Some Republicans like Gov. Doug Ducey have said that they want to ensure there's an adequate replacement so hundreds of thousands of now insured residents do not lose coverage.