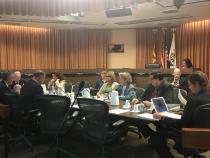 (Photo by Jude Joffe-Block - KJZZ)
The Tucson City Council voted on Dec. 6 to defend its gun ordinance in court and file a separate lawsuit challenging SB 1487. 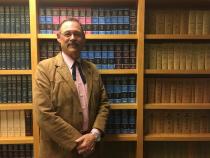 In Arizona, there is long-standing tension between Arizona’s cities, several of which have liberal leadership, and the state Legislature, which is conservative. And the battle between them is heating up heading into 2017.

When cities have considered or tried to enact things like paid sick leave, and requirements that commercial buildings must report energy use, the state Legislature has repeatedly passed state laws to block city efforts.

After the city of Bisbee passed a ban on free plastic bags at grocery stores, the Legislature banned cities from banning plastic bags.

Republican state Sen. Steve Smith says it’s his job in the Legislature to intervene if there are local policies that could be bad for all of Arizona.

"We want as little government involved in our lives as possible on all levels,” Smith said. “But sometimes you have to write a law to undo a bad one.”

But now this battle between states and cities is escalating even further with a new state law that threatens city dollars.

Smith believes there is a problem that some cities continue to flout state law. For example, Tucson has some local gun-safety ordinances. Smith is of the opinion the ordinances violate an Arizona law that says gun regulation can only be set at the state level.

So Smith and his Republican colleagues passed a new preemption law this year, known as SB 1487, that they say will force cities to follow Arizona law.

SB 1487 says any city with a policy that violates state law  will lose its share of revenue from the state — which is critical to city budgets.

The new law comes after Gov. Doug Ducey warned cities in his State of the State address last year that if they pursued local ordinances on minimum wage and employment policies, they would risk their shared revenue from the state.

Under the new preemption law, state lawmakers can report city policies they believe are in conflict with state law to the state attorney general. The attorney general can either decide if the policy in question violates state law and if the city’s shared revenue should be revoked, or refer it to the Arizona Supreme Court to decide.

“If I get a ticket because I willingly disobeyed to following the laws, then I deserve it,” Smith said. “If a city or town willfully and knowingly disobey state law, then they're going to pay the consequences of it.”

But the threat to city funding has infuriated mayors around the state.

“It's illegal, and but more importantly it is just unacceptable,” said Phoenix Mayor Greg Stanton, a Democrat, of the new law.

The city of Phoenix currently counts on $400 million in shared revenue from the state.

“If they don't like the public policies that I’m supporting for the city of Phoenix blast me in the media take a shot at me,” Stanton said. “That's great. Let's have a good public debate about those issues. But don't threaten our police officers and firefighters in losing resources as a result of that.”

Soon after the new state preemption law passed, Republican state Rep. Mark Finchem said he heard from some people concerned about one of the Tucson gun ordinances. He represents a rural ranching area north of Tucson.

The ordinance says Tucson police should destroy certain abandoned and seized guns, rather than resell them. But an existing state law says guns in Arizona should be resold, not destroyed, and another says only the state can regulate guns.

“So I had some folks that came to me and they said look, we believe we have personal knowledge that the city of Tucson is in violation of state statute, and we'd like to have you look into it,” Finchem said.

At stake? All of Tucson’s shared revenue from the state.

The city currently gets more than $115 million per year from the state in shared revenue, which is nearly a quarter of the city’s budget.

The city has vowed to defend its ordinance in court, but the new law was written to discourage that.

The law says if the city wants to fight the case, it must post a bond equivalent to the amount the city received in shared revenue over the past six months. In Tucson’s case, the bond amount would be more than $50 million.

“We believe that's an unconstitutional bar from our ability even to go into court and defend our own rights,” Rankin said.

The city's response is due on Friday. Meanwhile, the city filed its own lawsuit on Dec. 12 challenging the constitutionality of the new state preemption law in the hopes it will be struck down by the courts.

But even as Tucson fights this new law, Tucson City Councilman Steve Kozachik says he expects other Republican-controlled states to try to pass similar laws.

“Arizona is ground zero for it,” Kozachik said. “We are the first. But don't be fooled — this is happening in states all over the country and we just happen to be the first one in line.”