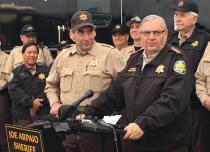 After nearly 24 years as Maricopa County Sheriff, Joe Arpaio has less than a month left in office.

No one in Maricopa County history has served as sheriff longer. And the Republican lawman told reporters at a recent press conference that it will be hard to go.

“She feels somewhat sad that I didn't win,” Arpaio said. “But that's the way it is. The voters have spoken. And life continues.”

After taking office in 1993, Arpaio first became nationally known for being tough on inmates by making them sleep in outdoor tents, wear pink underwear and work in chain gangs.

Later, he was both beloved and despised nationally for his crackdown on illegal immigration.

There were also numerous scandals during his tenure, including revelations of misspending, hundreds of uninvestigated sex crimes, baseless investigations into political rivals and a federal judge’s finding Arpaio’s office deputies racially profiled Latinos. That racial-profiling lawsuit has cost taxpayers close to $50 million so far.

Those themes showed up in attack ads against Arpaio this election, some of them paid for by a political action committee backed by liberal billionaire George Soros.

While Arpaio flooded the TV air waves with his own ads, the voters made clear at the polls they were ready for a change.

Come early January, not only will Arpaio stop reporting to work, but he will also lose his security detail, which has been watching over him for the past eight years as a result of threats against him.

Looming ahead for Arpaio is a federal criminal contempt of court trial in April. U.S. Department of Justice lawyers from the Public Integrity Section are prosecuting him for defying a judge’s orders to halt his immigration patrols.

But Arpaio still has a fan base all over the country, and regularly gives speeches in other cities. He hints he doesn’t plan to disappear from public life.

“I may be a private citizen, maybe, but a private citizen is a very powerful rank to have,” Arpaio said. “Think of that. So I'm known around the world. I'm sure some people are going to remember this sheriff.”

Arpaio was one of President-elect Donald Trump’s earliest and most loyal supporters and there has been some speculation over whether Arpaio could get some kind of appointment in the Trump administration.

Arpaio won’t reveal how he might respond if he gets an offer, but he did say it would be tough to turn Trump down.

“Because of who he is and how he's treated me and my family,” Arpaio said. “I'm not giving an answer. I'm just saying how would be more difficult for me to make up my mind.”

Volunteer posseman Bill Crawford said he is sad to see Arpaio go, though he is hopeful the change in leadership under Penzone will be positive. Crawford said it has been an “honor and a privilege” to volunteer for Arpaio for the past decade.

While Arpaio is known for being strict with his inmates, Crawford said he also should be credited with straightening out many lives.

“He took very good care of people, and he made it punitive so that they didn't want to come back," Crawford said of Arpaio's jails. "But while they were in there, he had programs to rehabilitate them.”

Meanwhile many of the sheriff’s critics see Arpaio’s departure as a positive change for the county.

Immigrant-rights activists celebrated his defeat, but so did several county officials and judges who were once criminally investigated by Arpaio and, in some cases, indicted by former County Attorney Andrew Thomas on allegations of corruption that were later found to be baseless.

Outgoing Republican County Supervisor Andy Kunasek was once investigated by the sheriff and believes those investigations were politically motivated.

“I think that a lot of people were targeted because they wouldn't play ball or wouldn't do exactly what the sheriff wanted,” said Kunasek, who retired after nearly 20 years on the Board of Supervisors this year. “And that's third-world dictatorship. That is not America. And and for that I say good riddance.”

Arpaio still has at least one major media event left before he departs office in the first days of 2017. He’s expected to reveal new details about his investigation into President Barack Obama’s birth certificate on Dec. 15.

As Arpaio’s most recent press conference drew to a close, he seemed a bit wistful these appearances would be ending soon for good.

“Thank you for coming out,” he told reporters. “And, I’m going to miss you.”

Paul Penzone will be sworn in as the new Maricopa County Sheriff on Jan. 4.