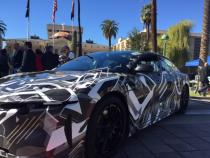 (photo by Carrie Jung - KJZZ)
Production of Lucid's electric cars is expected to begin in 2018.

Lucid Motors has announced the company will be opening its newest electric-car manufacturing site in Casa Grande. The deal is expected to bring about 2,000 jobs to the area by 2022.

Company officials said several factors attracted them to Arizona, including access to interstates and land that could quickly be ready for plant construction. Proximity to their supply chain in Mexico was also a factor.

Sonora Gov. Claudia Pavlovich attended Tuesday’s announcement. She says the economic teams of Sonora and Arizona have been working together for several months to make this project happen.

"This announcement proves how bilateral relations can bring prosperity for our citizens when we work for common goals," Pavlovich added.

Plant construction and initial hiring are expected to start in 2017, with the start of production following shortly after in 2018. Capital investment for the facility is expected to reach about $700 million.