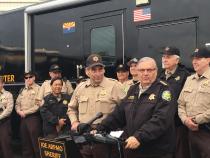 This is the 23rd holiday season that Maricopa County Sheriff Joe Arpaio’s volunteer posse will patrol shopping malls in Phoenix and surrounding areas.

It’s also among the last events Arpaio will oversee after losing his re-election bid to Democrat Paul Penzone earlier this month.

Arpaio started having his posse patrol malls during the Christmas shopping season in 1993 in response to a series of carjackings the year before.

He presided over this season’s kickoff event on Monday afternoon at Park Central Mall, though the press conference doubled as an opportunity for Arpaio to say goodbye to his post.

One reporter asked Arpaio if the volunteer posse would continue under Penzone.

“Don’t ask me,” Arpaio responded. “There is a new sheriff, ask him.”

Another reporter asked if the two had met yet.

“I’ve had my staff meet with him and he is trying to help out in a nice transition,” Arpaio said.

Arpaio was coy when asked about whether he would accept a position in the Trump administration if he is offered, though he did say it would be tough to turn Trump down.

Arpaio also said it will be hard to leave behind his employees when he leaves office at the end of this year, since he says he considers them family.

The outgoing sheriff has at least one more press conference on his schedule. He has set a Dec. 15 date to discuss the conclusions of his Cold Case Posse’s investigation into allegations that President Barack Obama’s birth certificate was forged.