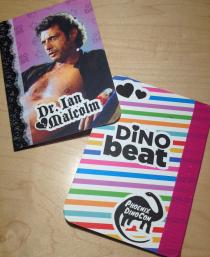 Let’s face it, most of us haven’t outgrown our childhood fascination with dinosaurs. Whether it’s watching "Jurassic Park" for the 27th time or wondering just how King Kong could possibly summon the strength to save Fay Wray from that giant T-Rex.

If you’re feeling nostalgia as you hear this, you’re not alone. And you may feel at home at DinoCon, a convention specifically for lovers of pop culture dinosaurs.

You may not realize just how long the history of dinosaurs is in popular culture. From the 1914 silent movie "Gertie the Dinosaur," up through "King Kong" and "Godzilla," to the Flinstones and Peewee’s Playhouse.

Rest assured, DinoCon will acknowledge them all. It’s sort of like a ComiCon to celebrate dinosaurs. There are exhibitors, panel discussions, and all the dino merchandise you can carry.

The convention was started by two sisters — Patty Jimenez and Julia Zolondz, who wasn’t always a fan of the Jurassic-era creatures.

"I was actually afraid, like deathly afraid, of dinosaurs until I was 30," Zolondz said. "And then I decided to take the plunge and I watched all three 'Jurassic Parks' in a row, and I discovered that I loved them and I was obsessed with them."

So it makes sense that "Jurassic Park" features prominently in the convention. And one of the most anticipated guests of the day is Michael Trcic, a special effects artist responsible for that oh-so-terrifying T-Rex in the film. Trcic now lives in Sedona.

"So he did everything from design it to make several scale models to the life size animatronic and puppeteer the—the animatronic," Zolondz said.

But it’s not just the dinosaurs that will be celebrated. Jimenez says there will also be a hands-on space at DinoCon where fans can make their own miniature “Teen Beat”-style magazines that feature what she calls “the hunks of Jurassic Park.”

"There is this glorious moment when Ian Malcolm played by Jeff Goldblum, removes his shirt for no apparent reason, and he is our number one hunk," Jimenez said.

And there’s plenty of serious discussion on the schedule, too. Jimenez’s 16-year-old son Trinidad Jimenez will be leading one of the panels.

"Last year I did a panel on the differences and similarities between Jurassic Park the movie and the novel, which is one of my favorite novels. And so this year to follow up I decided to do– essentially the same panel, but on 'Jurassic Park 2: The Lost World' both the book and the movie," Trinidad said.

Another highlight will be a geologist who will be talking about what pop culture gets right and wrong when it comes to dinosaurs. Jimenez said it helps make DinoCon a great mix of fact and fiction.

"It’s the perfect combination of the pop culture that we’re all about, but bringing in a little bit of the science of dinosaurs that people might be expecting," she said.

In the end it all comes back to the storybook dinos. And of course, Zolondz and Jimenez each have their favorites. For Zolondz, her childhood fears keep her favoring the sweeter of the prehistoric beasts.

"I really like friendly dinosaurs. So, I really like Rex from Toy Story. I think he’s super sweet and a really good friend," Zolondz said.

For Jimenez, it’s classic. The velociraptor from "Jurassic Park."

"I love that scene with Muldoon at the end. And the raptors have hunted him and distracted him and then he, they come from the side and you know he just looks up and he’s like 'clever girl.' And they just attack. And it’s just like shivers down my spine. I love it. Gets me every time," Jimenez said.

DinoCon will start at 3 p.m. Saturday at the Phoenix Center for the Arts.