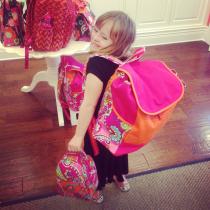 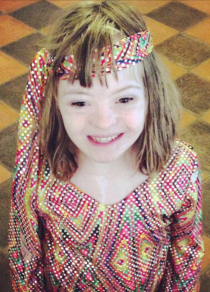 (Courtesy of Amy Silverman)
You never know what Sophie will be wearing each day.

It’s not easy being a junior high student. What do you wear? How do you fit in? Commentator Amy Silverman talks about back-to-school shopping with her two daughters.

I am standing in the middle of Old Navy, trying hard not to pout.

My daughters race from rack to rack, gathering items to try on. Annabelle's pile includes a pale yellow tee shirt, red-and-white-striped shorts and several pairs of jeans— 13-year-old girl classics. I send her to the dressing room.

Sophie offers up a teal-and-blue-print dress and a pink linen shirt trimmed with tassles.

“Put it back, Sophie,” I said, trying to sound firm instead of sad. “You know why we're here.”

Sophie has the biggest wardrobe of any kid I know. She’s entering the sixth grade, but at 11, she's the size of a kindergartner. So everyone gives her their hand-me-downs and she never outgrows them.

But Sophie can't wear any of that to junior high.

Annabelle is entering eighth grade and is going to a performing arts school that prohibits short shorts and spaghetti straps and welcomes just about everything else — except a kid with Down syndrome.

So even though Sophie loves to dance, sing and act, she'll be going to our neighborhood junior high school — a large, institutional-looking place with limited arts classes and a strict dress code.

I get the uniform thing. I get that clothes are tough, particularly in junior high, that they are distracting, and that uniforms can be a great equalizer.

But I don't want Sophie to wear a uniform. When she was born, I worried a lot about what she wore, taking care to make sure everything matched, that no one could make fun of my funny-looking and acting kid. As she grew, she chose her own outfits. I cringed at a fur-trimmed velvet party dress on a hot day, or sequins and sweatpants — but I came to love the morning reveal.

I sent her off to elementary school each day not as a little girl with Down syndrome, but as Sophie. The only one in a sparkling caftan with a matching head scarf better suited to Rhoda Morgenstern.

I stare at the racks of navy blue polo shirts and khaki skorts, picturing Sophie next to the other students, distinguished only by her features.

When we get home, I ask Annabelle if it bothers her that her sister will be wearing a uniform.

“Yeah…. People don't always listen to Sophie,” she said. "I'm not sure if it's because they don't notice her or because they can't understand her when she speaks. But everyone sees Sophie's clothes. That's how she expresses herself."

That’s why Annabelle wants to be a fashion designer.

“I think the hardest thing aside from getting up and speaking in front of other people,” she said, “is wearing what you want to wear.”

So far, Sophie doesn't seem too bummed about wearing a uniform.

In the dressing room, she slips on the uniform and grabs my phone, posting a selfie to Instagram.

Underneath the photo, she writes, “Back to school.”

I think Sophie will still manage to stand out in junior high.

And just in case, I let her pick out the biggest, brightest pink and orange flowered backpack we can find.

Amy Silverman is managing editor of Phoenix New Times. She blogs about her daughter Sophie at GirlInAPartyHat.com.