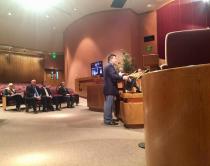 Glendale will pay out millions in settlement money to a National Football League club and perhaps lose a National Hockey League franchise.

Early Monday, the Arizona Coyotes announced plans to relocate to the East Valley. But that wasn’t why the Glendale City Council held a special meeting the same afternoon.

The meeting was to consider settling a notice of claim filed by the Arizona Cardinals and the Arizona Sports & Tourism Authority (AZSTA), and end years of dispute over parking for University of Phoenix Stadium.

After spending about 90 minutes talking behind closed doors, the council voted 4-3 to approve the settlement. Glendale will pay about $14 million dollars in damages for not providing contractually promised parking. Additionally, the city will pay about $3 million dollars to build a pedestrian bridge and underpass for a new parking lot south of the stadium.

Every council member explained their vote. Those who voted against the settlement worried that residents did not have enough time to review the proposal. The agenda for Monday's special council meeting was posted the day before Veterans Day.

Glendale City Manager Kevin Phelps said he kept the council in the loop during months of negotiations, and he can’t imagine why Glendale would wait longer to settle.

“There’s not a larger stakeholder in Glendale than the University of Phoenix Stadium, Arizona Cardinals and AZSTA,” Phelps said. “So to me it was a natural outfall to try and figure a solution so we can move forward.”

Cardinals President Michael Bidwill spoke to the council before they went into executive session. Bidwill declined to discuss specifics about the settlement negotiations, but said the Cardinals were seeking more money in damages.

“I feel like it’s a fair deal because we were negotiating for over nine months, back and forth,” Bidwill said. “And there was a give and take, and there were some tough negotiations at points.”

While the council debated the settlement in private, Glendale City Council Member-elect Joyce Clark spoke about the Coyotes’ plans to head east. Cooling the ice for 41 games at Gila River Arena, plus practice, is a tremendous cost to the city, she said.

“I have been told by a reliable source that if the Coyotes were not in the arena, the city would probably save about a half a million dollars a year,” Clark said

Clark also said she’s not convinced the Coyotes’ relocation plans will go through.

There’s still a lot of work to be done before a deal to leave Glendale can be finalized, Phelps said, and he wants the Coyotes to stay.

“We continue to encourage our fans and our businesses to support the Coyotes,” Phelps said. “They are an important asset for the community. What I have assured the Coyotes, and I know AEG (the company Glendale hired to manage Gila River Arena) has done as well; that we’re not going to focus on the what-ifs of two or three years down the road. We’re going to focus on doing everything we can to make the franchise successful today.”