How Public Schools Compete For Students 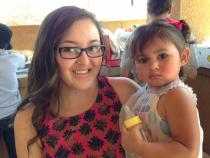 (Photo by Stina Sieg - KJZZ)
Annette Guevara has two young children, including a 4-year-old son who is starting school next year. She said the local, traditional public schools are "iffy," so she's shopping around.

There’s a fairly new billboard on 7th Street, just south of I-17 in Phoenix. It features teens smiling under the words “60 Years of Excellence, South Mountain High School.”

If you haven’t noticed it, you’re definitely not Principal LaCresha Williams.

“I saw it!” she exclaimed, clapping her hands together. “I almost started doing, like, a happy dance, jumping out of the car.”

The billboard is the latest in the campaign to draw kids to her south Phoenix high school, which serves about 1,700 students. Because of something called open enrollment, South Mountain has to vie for students with other traditional public schools. It also competes with charter schools, which are funded with tax dollars, too, and make up a fifth of all public schools in the state.

But Williams said she doesn’t mind having to advertise South Mountain.

“We should do that,” she said. “Our kids deserve it, the public deserves it. I think, I’m not threatened by those schools, because I know what we have to offer.”

She then listed off things like the drama programs and the mock trial team. There’s also an aeronautics program where students can earn a pilot’s license. Having people know about these offerings matters to Williams, out of pride and also necessity.

That’s why many schools don’t just have a public information officer any more. They have a public relations person, like Craig Pletenik. He spent years marketing professional baseball. Now he works for the Phoenix Union High School District, which includes South Mountain.

“Our customers are our students,” Pletenik said. “Just like fans coming to a baseball game, and when I was in baseball, the key to surviving was to put fannies in the seats. Well, it’s no different than that here.”

As he spoke, he was standing in front of South Mountain and pondering its “curbside appeal,” something most people equate with restaurants or pieces of real estate. Pletenik has done brochures, postcards and even ads in movie theaters, all with the same theme.

As he sees it, the key is drawing in kids with other kids.

“Successful kids, attractive kids,” he said. “Kids that are dressed in every sort of uniform and costume.”

There is some evidence these ads are working. The district gained nearly 750 new students across its 16 campuses last year. But Pletenik admitted that traditional public educators are still just starting to learn how to market their schools. When it comes to advertising, it can feel like charters are on a completely different wavelength.

Only a few miles away, a DJ was giving a shot out to a small but growing crowd at an apartment complex pool.

“We have hot dogs. We have chips. We have Kool-Aid. We have some games,” Koko Hunter said, as families ate around him.

He’s a marketing person for nearby South Pointe High School, and this is one of the ways his charter school tries to get new students in the door. It’s a completely free party open to everyone, even those who don’t have school-age children. Hunter explained that when you give someone a free hot dog, it’s not just about the hot dog. It’s about the human connection.

“And whenever we hit them with some mailers, now it doesn’t go into the trash can,” he said. “They associate that mailer with what we did for them that day.”

But do these hands-on experiences actually matter to parents? Definitely, said Annette Guevara, a mom who lives in the building. When a school does outreach, she can tell it cares about its students, she said.

“I enjoy people going out and doing community events, because then I’m like, ‘OK, my kids are going to enjoy that when they go to that school,’” she said.

Her 4-year-old son will be starting school a year from now. With all the competition in town, Guevara’s not sure where he will go. But at this point, she’s leaning toward a charter school.