Immigrants Who Campaigned Against Sheriff Joe Arpaio Celebrate His Defeat 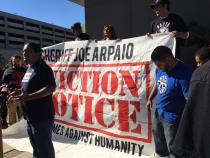 (Photo by Jude Joffe-Block - KJZZ)
Members of the Bazta Arpaio campaign hold an Eviction Notice for Arpaio outside of the sheriff's office.

Immigrants and their allies who campaigned to get Sheriff Joe Arpaio out of office celebrated his defeat Wednesday. They unfurled a giant “Eviction Notice” in front of the Maricopa County Sheriff’s Office headquarters in downtown Phoenix.

Tempering their celebration was Donald Trump’s presidential victory, since he has promised immigration enforcement policies that echo what Arpaio attempted locally.

In the months leading up to the election, the Bazta Arpaio campaign went door-to-door mobilizing voters to vote against both Trump and Arpaio. The campaign staff and volunteers included young people and unauthorized immigrants who were directly impacted by Arpaio’s immigration enforcement tactics.

News that Democratic candidate Paul Penzone beat Arpaio spread just after 9 p.m. Tuesday evening. While many ballots have yet to be counted, preliminary tallies show Penzone’s margin of victory at a decisive 11 percent.

For months, Arpaio’s opponents have staged their events with a giant balloon of Arpaio’s likeness wearing prison stripes and handcuffs, a reference to the criminal contempt of court charge against him.

On Wednesday, members of the Bazta Arpaio campaign tipped the balloon over and chanted, “Arpaio has fallen,” in Spanish.
Tania Unzueta of the national organization Mijente said unauthorized immigrant activists in Maricopa County who organized against Arpaio could provide an example nationally to counter Trump's policies.

Maria Rodriguez, an immigrant without papers who worked on the Bazta Arpaio campaign, said she did not fear the Trump administration, even though he has promised mass deportations.

"That man took all the fear out of me," Rodriguez said about Arpaio. "I'm ready to fight."

“We are looking forward to speaking with Paul Penzone, he has a huge task forward but we expect big things,” Garcia said. “If Paul Penzone does similar things that Arpaio does or does not do good things for our community, we will make sure Paul Penzone is held accountable.”

“My thanks and appreciation to the people of Maricopa County for the faith and trust they put in me over the years,” read the statement. "I am also tremendously grateful for the hard work and dedication of every employee of my office."