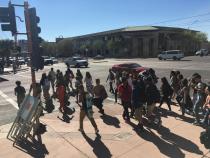 Students marched to the state Capitol and held signs saying “Trump is not our president” and “Stand against racism, hate & homophobia.”

Eighteen-year-old senior Diana Navarro said Trump’s win was causing her and her classmates to feel fearful.

“Most of us are immigrants, and our families and our relatives are immigrants,” Navarro said. “We don’t know what is going to happen later on, and we are really scared.”

Her classmate, 17-year-old Frida Sanchez said she was disappointed that she could not vote.

“There are a lot of Democrats that didn’t vote either, that they should have voted, and there are other people that when they voted for Obama they didn’t vote this year,” Sanchez said.

Sanchez said she was in disbelief that Trump won the election.

“Nothing that he says is true,” Sanchez said about Trump. “About immigrants, it is not true. He insults people that have disabilities, that is really disrespectful. I don’t know how the U.S. wanted to vote for Trump for four years”

Fellow student Yonas Kahsai, who is 17 and Somali-American, said he helped organize the protest because Trump won the presidency while losing the popular vote.

“I believe Trump is not the people’s choice and he won’t represent us all,” Kahsai said. “We are the new Arizona, we want to be represented, we all have voices it is our future and our voice.”

Kahsai said he had worked with labor organizations to defeat Maricopa County Sheriff Joe Arpaio this election and vowed to keep working to stand up to Trump’s policies that he disagrees with.

“I’m so glad that we came to America, and I am going to keep fighting to make sure America stays my home,” Kahsai said.

Students from other local schools, including Carl Hayden Community High School and Metro Tech High School, converged at the Capitol to rally.

High school students also walked out on Tuesday to protest Sheriff Joe Arpaio and help the campaign against him.