Did You Know: 'A' Mountain Has A Long History 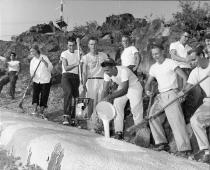 It’s become the symbol for the town and its college. And for more than 50 years, it has also been a landmark for one of the state’s most famous sports rivalries.

High above downtown Tempe and visible to planes flying to and from Sky Harbor Airport is Tempe Hayden Butte— better known as A Mountain. It’s nicknamed after the big, gold 'A' that’s nestled on the hillside. It’s a symbol for Arizona State University. Did You Know... A Mountain has been the bedrock of the rivalry between ASU and UofA since the 1950s?

“History has it that back in 1952 in the dark of night, some of the students from down at the University of Arizona came up and took some dynamite to that 'A' and blew it off the mountain," said Dan Turbyfill with ASU’s alumni association, the group charged with preserving the A.

“Once they found out that we had an A on our mountain, that might have sparked a little bit of outrage,"Turbyfill said. 'Because the A hasn’t always been an A up there.”

Tempe Hayden Butte has had several letters on the mountain. In 1918 students of the Tempe Normal School installed the first letter, an N. It was changed to a T in 1925 when the school was renamed Tempe State Teachers College. And in 1938 a different letter was installed, an A, for its new name, Arizona State Teachers College. Each time the letters were created with loose rocks. The A sat on the mountain for 20 years before it was blown off. By 1955, ASU replaced the letter A once and for all.

“It’s made out of re-enforced concrete," Turbyfill said. "So it’s got rebar in there and then the concrete is poured over the rebar. And it stands 55 feet tall and 60 feet across.”

The mountain has become one of the most recognizable and iconic land features in the area. Because of its historical significance, Tempe Hayden Butte — "A Mountain" — is listed as a preserve park. The foundation of Tempe’s first water reservoir from the early 20th century is located near the top of the hill. And there are more than 500 Hohokam petroglyphs here. Turbyfill said caring for this hill is taken very seriously.

“We actually have a student that lives over in student housing actually," Turbyfill said. "They keep an eye on the A. So when they wake up in the morning, they check the A and if it's anything other than gold a text message goes out and the 'A Team' mobilizes.”

Sounds dramatic, but there is such a team. The crew routinely repaints the A with a color actually named ASU Gold every time it’s needed. They also help maintain school traditions. Each first week of fall semester hundreds of freshmen students are seeing marching up the butte trail to whitewash the A to signal the beginning of a new school year.

Painting the "A" from ASU Video Production on Vimeo.