Questions Build Over Line Between Fraud Prevention, Voter Intimidation At The Polls In Arizona 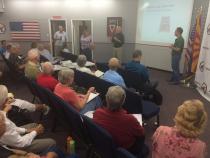 A federal judge in Phoenix will hear arguments Thursday about whether to block Republican groups from engaging in certain activities at the polls on Election Day.

The Arizona Democratic Party is arguing that Republican efforts to monitor polling places to prevent fraud will actually intimidate voters, while the Arizona Republican Party said it is necessary to have people watching the voting process.

In response to building questions over the line between protecting the integrity of the election and intimidating voters, on Wednesday Secretary of State Michele Reagan issued new guidance on conduct both inside and outside of polling places.

So what kind of activity is allowed at a polling place, and what is not?

Arizona law allows each political party to train observers who then can watch the voting inside a polling place. Both Democrats and Republicans have been training these observers in recent weeks.

Robert Graham of the Arizona Republican Party said in past elections, only about 150 Republicans would volunteer to be political party observers. But this year Donald Trump’s warnings that the election could be rigged prompted many more to volunteer.

“We have probably over a thousand poll watchers today going through training, I mean we really are having a hard time making sure they go through the training properly,” Graham told KJZZ in an interview last week. “But we'll get them there.”

Graham said it’s a good thing for all the parties to have observers in the polls.

“This way people just know a little bit more that they're being watched and their behavior needs to stay in line with the law, and that's what we to ask to maintain the integrity of the vote,” Graham said.

At a training for county poll workers earlier this week, Tonya Tunnell of the Maricopa County Elections Department taught what the political party observers can and can’t do inside the polls.

Tunnell said political party observers cannot just walk into a polling place last minute if they feel like it. They must present an official letter from the county chairman of their party to be let in. And they aren’t allowed to talk to voters or record anything or take photos inside the polling place.

Tunnell said political party observers can raise questions or concerns with those in charge at the polling place. They can also report issues to their party by phone.

The Arizona Democratic Party alleges in their federal lawsuit that the Arizona Republican Party may be encouraging their party observers to engage in what Democrats claim is intimidation.

In court filings Democrats argue Republican officials have been quoted in the past saying party observers can follow voters out of the polling place and to the parking lot and take pictures if they suspect wrongdoing.

No photography is allowed within 75 feet around the polling place. No political signs, campaigning or firearms are permitted in that zone. Only voters and their kids or helpers are allowed in line.

“So if you are just a citizen that wants to watch the process or you will have those campaign supporters, you would stay outside the 75-foot zone,” Tunnell told the poll workers.

But there are still limits to what members of the public can do and say outside of the 75-foot zone, since there are laws prohibiting voter intimidation.

One citizen group planning to be outside is called Stop the Steal. The group is run by Roger Stone and supports Donald Trump. It is recruiting volunteers to do what it calls "exit polling," essentially asking voters questions in an effort to curtail voter fraud.

Another group planning to watch the outside of polling sites is the Oath Keepers. They are made up of current and former law enforcement and military members.

“It is just basically a surveillance operation, and observe and report if we see anything out of the ordinary or one of the other organization that is known for causing problems at these kinds of events show up,” said Jim Arroyo, a veteran and Oath Keeper leader in Chino Valley.

Arroyo said Oath Keepers will be on the lookout for voter intimidation and fraud, as well as people dropping off several ballots in violation of Arizona’s new ballot harvesting law.

“We just become good witnesses and photo document anything we can, and just basically dial 911 and let the police handle it,” Arrroyo said.

The Arizona Democratic Party doesn’t mention the Oath Keepers in their lawsuit. But the Lawyers' Committee for Civil Rights in Washington, D.C., has voiced concern that Oath Keepers will intimidate voters, and has asked the U.S. Department of Justice to investigate the group.

Arroyo said he believes those concerns are unfair. He said Oath Keepers is non-partisan and there to prevent intimidation and help law enforcement.

The guidance released Wednesday by Secretary of State Michele Reagan warns “taking photos or video outside the 75-foot limit could also have a potentially intimidating effect on voters entering or exiting the polling place.”

The guidance also says “filming voters based on race, ethnicity, religion or political affiliation (if known) is per se inappropriate.” The guidance recommends that those who wish to film first inform the polling place marshal or contact law enforcement first.

The guidance warns civilians wearing uniforms to 'pseudo-identify' as an election official or law enforcement official could have an intimidating effect, as could "similar organization that attempts to 'police' polling places or their surroundings."

Firearms are banned inside polling places, but Reagan’s guidance makes clear that even outside the 75-foot zone there could be some limitations. The guidance includes “aggressive or ostentatious displays of weapons” on a list of potentially intimidating conduct.

Secretary of State Spokesman Matt Roberts acknowledged that there is a delicate balance between freedom of speech and protecting voters from intimidation.

“Folks that are outside that 75 do need to understand, in some way, that it is a free speech area,” Roberts told Capitol Media Services. “But by no means does anybody have a right to get in someone's face outside the 75.”

The provision of the federal Voting Rights Act that deals with voter intimidation has been rarely enforced, according to former Justice Department voting rights lawyer, William Yeomans.

The Justice Department used to send federal observers to Arizona every federal election, in part to watch for voter intimidation.

That particular program is not in effect this presidential election, since the U.S. Supreme Court struck down a section of the Voting Rights Act in 2013.

But Maricopa County elections officials said they are still expecting 20 Justice Department observers in the county on Nov. 8.

A spokesman for the Justice Department said the department had not yet formally announced where it would deploy its staff this election.

EDITOR'S NOTE: This story has been updated with information about Secretary of State Michele Reagan's guidance as it pertains to law enforcement at polling places.